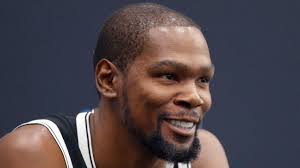 It was just one game, but the message the Brooklyn Nets sent to the rest of the NBA on Tuesday night was loud and clear.

They are a certifiable championship contender.

Kevin Durant makes them that.

Durant, unquestionably one of the most gifted offensive players the game has ever seen, sat out last season after tearing an Achilles tendon while playing for Golden State in 2019.

But he was a picture of health against his old team and put a hurt on them in the Nets’ resounding 125-99 victory. Dominant from the get-go, Durant scored 22 points in just 25 minutes as the Nets annihilated the Warriors in the NBA’s first regular-season game of the season.

If Durant’s dazzling performance is an accurate indicator of things to come, the Nets won’t just be challenging for the Eastern Conference title but the NBA title as well.

“If they play like this all year, they’re going to make a lot of noise,’’ said Hall of Fame center Shaquille O’Neal during a post-game show on TNT. “Tonight, they looked good, really good.’’

Indeed, not only did Durant look great but so did Kyrie Irving, Durant’s good friend who, when focused, is as good as any point guard in the game. Irving totaled a game-high 26 points and, like Durant, was on the floor for only 25 minutes as the Nets cruised.

The Nets boast wingman Caris LeVert and center Jarrett Allen, who would be starters for a flock of other teams.

Based on talent, the Nets don’t take a backseat to anyone in the Eastern Conference. But can they stay healthy, especially Durant, and, more importantly, can they stay together, especially with the controversial and enigmatic Irving?

If they do, they are now the team to beat in the East. If they don’t, several other talented teams are lurking in the shadows.

Here’s how I envision this season will shake out, with capsule comments on each of my projected top eight teams:

1. MIAMI – There are some observers who contend the Heat’s sterling play in the “bubble’’ in Orlando during last season’s playoffs was a fluke and won’t advance to the Finals again this season.

The Heat have the best chemistry of any team in the East and they have a top shelf coach in Erik Spoelstra.

Jimmy Butler is a big-time player, Bam Adebayo has emerged as one of the elite interior players in the game, Goran Dragic is the ultimate competitor and Tyler Herro is a star in the making.

Furthermore, the Heat didn’t stand pat during the offseason. They upgraded their roster. Moe Harkless and Avery Bradley were strong pickups and rookie Precious Achiuwa could be the steal of the draft.

3. MILWAUKEE – The Bucks, who posted the best regular-season records in the East the last two seasons, slightly upgraded their point guard position by jettisoning Eric Bledsoe to New Orleans for Jrue Holiday in a multi-team transaction.

But the Bucks paid a ridiculously steep price for Holiday, who has been an All-Star just once in his 11-year pro career. In addition to Bledsoe, who will start for the Pelicans, the Bucks gave the Pelicans three future first-round draft picks — all unprotected at that — and two future draft swaps.

Losing Bledsoe was one thing, but the Bucks also lost two other reliable veteran backcourt players: combo guard George Hill in the Holiday-Bledsoe trade and shooting guard Wesley Matthews, who opted to sign with the Lakers. The trio of Bledsoe, Hill and Matthews knew their roles and performed them admirably last season.

There are more than a few NBA officials who contend the Bucks, despite shaking up their roster, aren’t any better than last season when they couldn’t even make it out of the second round of the playoffs.

4. BOSTON – The Celtics have a pair of elite young players in 22-year-old Jayson Tatum and 24-year-old Jaylen Brown, and they took a nice step toward plugging their biggest hole by signing a quality center in Tristan Thompson.

Those three players, along with Marcus Smart and Kemba Walker, comprise perhaps the best starting lineup in either conference.

But the Celtics lost the versatile and productive Gordon Hayward to Charlotte and still have a highly suspect bench.

5. INDIANA – The Pacers didn’t make any significant player personnel changes during the truncated offseason and will need Victor Oladipo to regain his All-Star form while seeing continual growth from their young talented big men: Domantas Sabonis and Myles Turner.

6. TORONTO – With All-Stars Kyle Lowry and Pascal Siakam and fringe All-Star Fred VanVleet still in the fold, the Raptors will remain formidable.

But the Raptors could feel the adverse effects from losing two proficient big men in Serge Ibaka (to the L.A. Clippers) and center Marc Gasol (to the L.A. Lakers).

For the Raptors to get back in the title hunt, they’ll need a bust-out season from small forward OG Anunoby, who at 23, has an intriguing upside.

7. PHILADELPHIA – The 76ers have had the distinction of being the league’s biggest underachievers the last two seasons and that prompted the Sixers ownership to show head coach Brett Brown the door and replace him with Doc Rivers.

If the well -respected Rivers can coax Joel Embiid and Ben Simmons into playing up to their potential, and if newcomers Danny Green and Seth Curry turn out to be the effective perimeter shooters the team has sorely lacked, the Sixers could be contenders instead of pretenders.

8. WASHINGTON – The NBA has evolved into a guard-oriented league and it can be argued there isn’t a better backcourt duo than Bradley Beal and Russell Westbrook, whom the Wizards acquired in a trade with Houston for John Wall.

The key for the Wizards becoming a playoff participant will be the play of their frontcourt, specifically forwards Davis Bertans, a lethal 3-point shooter, and Rui Hachimura, who is coming off a stellar rookie season (13.5 points and 6.1 rebounds).

Previous: Passing on the turnovers pays off for Packers
Next: Zielinski: Titans possess a stockpile of weapons