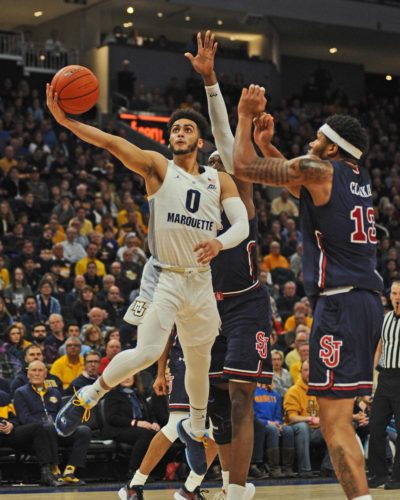 It seems throughout Markus Howard’s life, he’s had to confront one obstacle after another.

Whether it was as a child growing up in Chandler, Ariz., or as a young man matriculating at Marquette University, Howard has had to continually prove the skeptics wrong about his basketball abilities.

So it shouldn’t be surprising that, as the NBA draft approaches, Howard is once again hearing from the naysayers. They are chirping about how Howard is too short for the pro game, that he’s too casual about playing good defense, that he’s not a shoot first but a shoot second and shoot third type of player.

The fact of the matter is Howard could care less about the noise.

“That’s something I’ve dealt with my entire life and I have continued to play at a high level. When people question my size … who is going to continue to make the same mistake?

During his four-year stint at Marquette, his play spoke volumes. What he accomplished with the Golden Eagles was downright amazing. To wit:

Yet, while Howard enjoyed a collegiate career that most can only dream of having, he isn’t dwelling on the past. He’s immersed on the present and future and becoming an even better player.

Virtually every day since March, Howard has conscientiously worked on his game in Chandler. He’ll spend three hours each morning at the gym, the first 1½ hours on basketball drills and the other 1½ hours in the weight room. Often, he’ll return at night.

For Howard, preparing for the NBA draft is a family affair. His father, Chuck, is his trainer. Chuck was once a running back for the Indiana University football team and has been a well-respected strength and conditioning trainer for the last three decades.

His brothers Desmond and Jordan are also part of his training crew. Desmond is a basketball trainer and Jordan is a former Central Arkansas standout who played professionally last season in Puerto Rico.

Unfortunately for Markus, he hasn’t been able to reap the rewards of his hard work. Because of the CVID-19 pandemic, NBA teams haven’t yet been allowed to work out any draft prospects.

But that hasn’t prevented NBA teams from doing their due diligence on Howard. He has spent countless hours talking to NBA general managers, scouting directors and scouts in virtual interviews.

“I’ve talked to 26 teams in the league,’’ said Howard, noting the Milwaukee Bucks were one of them. “They’ve all been different interviews.

“I’d say they were more introduction type of meetings, getting to know me, asking what type of player I thought I was and how my game will translate at the next level. So it was about getting to know me and me pitching myself.’’

He did a stellar job with the latter, according to one longtime NBA executive who was part of an extensive zoom session with Howard.

“He was good, really good,’’ the executive said. “Came across very well. Smart. We didn’t see any red flags with him.’’

What Howard made abundantly clear to NBA officials during the interviews –he said one team interviewed him for about 2 ½ hours – was that he isn’t a one-dimensional player, that all he’s concerned about is scoring baskets.

“I think there’s a lot of misconceptions about who I am as a player, said Howard, who graduated from Marquette with a lofty 3.5 grade point average and communication studies degree. “People just look at me as a scorer.

“My role at Marquette was to be that. It’s something I can do very well, but at the same time, I’m a basketball player. I don’t necessarily feel I’m a point guard or a shooting guard.

“I feel that whenever I’m placed on the court, no matter my size, I can be effective in a lot of ways. I think at the next level, playing with high level talent night in and night out, I’ll be able to show everything I can do.

“I can be a playmaker, being able to find shots for others and in a pick and roll setting I can make the right reads. And I think I’m a very underrated defender. I think that at the next level, being able to play with more physicality that I would prefer, that’s something I can definitely do.

“Those are some things I bring to the table and that I’ll bring to any organization.’’ 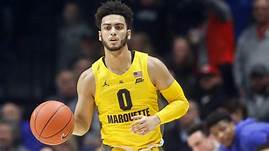 So, where could Howard wind up in the draft? A veteran NBA scouting director said there was a wide-range of opinions on Howard within his organization.

The aforementioned scouting director said he’s on the Howard bandwagon.

“I know he’s not that quick and I know about his defense and some (in his organization) see him as an early to mid-second rounder,’ the scouting director said. “I think he could be a first-rounder.

“If you can shoot – and he can shoot –people will pay attention to you, especially the way our game is being played now.’’

Added a scouting director: “The one thing he (Howard) can hang his hat on is his shooting. He is an NBA level shooter.’’

Howard, who is extremely confident but not arrogant, doesn’t have a trace of doubt where he fits into the draft, which is tentatively set for Nov. 18.

“I’ve heard a variety of opinions (about where he’ll be picked) but I definitely believe in my abilities, that I’m a first-round pick,’’ said Howard, who is being represented by Mark Bartelstein, a highly regarded agent who is the head of Priority Sports and Entertainment. “I feel that what I’ve been able to do in college for four years as well as who I am as a person is deserving of a first round pick.

“I know that’s out of my control. People have their opinions. At the end of the day, all I can control is what I can control.’’

Suffice to say, he’s done that quite nicely.

Previous: NBA history shows Bucks are in a world of trouble
Next: For openers, Packers will be severely tested by Vikings