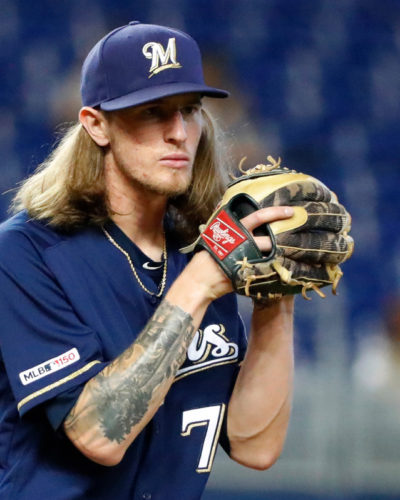 •    Josh Hader had a truly dreadful stat line on Friday; coming in the game in the ninth inning in a save situation against the Pittsburgh Pirates, Hader ended up with a blown save after walking five batters and recording only one out (he allowed two earned runs). He left the game with the Brewers behind in the contest, but the team eventually came back to win the contest. Hader became the 20th pitcher since 1909 to pitch less than 1/3 of an inning and record five or more walks. The last time it happened was in 2016 when Steve Delabar of the Reds lasted 0.1 innings and also had five walks. Lou Brissie, a pitcher with the Philadelphia A’s in 1950, is the only pitcher in MLB history to pitch less than 0.1 innings in a game and have six walks.
•    Let’s take a look at the flipside of Hader’s stats: Of all MLB pitchers with 200 or more career innings pitched, Hader tops the list with the highest strikeouts per nine innings. Hader had 363 career strikeouts in 214.1 innings, a per nine innings ratio of 15.24. He is one of only five pitchers to have a career strikeouts per nine innings ratio above 14. The others: Aroldis Chapman (14.81), Edwin Diaz(14.7), Craig Kimbrel (14.64) and Dellin Betances (14.44). All five of the pitchers listed above are active this season. Of those pitchers no longer active, Rob Dibble has the highest strikeouts per nine innings ratio, 12.03.
•    Is it possible that the Baltimore Ravens could win 15 or 16 games this season? If they continue their winning trend over the past five seasons, it might happen. The Ravens won five games in 2015, increased that win total to 8 in 2016, 9 in 2017, 10 in 2018, and won 14 games last season. The only others NFL teams to increase their win totals over the past two seasons are the Denver Broncos and Seattle Seahawks; the Broncos have increased their win totals from 5-6-7 over the past three seasons, while the Seahawks have won 9-10-11 over the past three years. It’s interesting to note that the Tennessee Titans have won exactly nine games in each of their last four seasons.
•    The Green Bay Packers will open the 2020 season against the Minnesota Vikings. The Pack and Vikes have opened the season six times, the last being in 2008 when the Packers won 24-19. The teams are each 3-3 in season-opening contests against each other.
•    There is a pretty good chance that Giannis Antetokounmpo will soon become the fifth Bucks player in team history to surpass the 1,000 point mark in playoff games for the team. Giannis has 934 career points in playoff games. Topping the list is Kareem Abdul-Jabbar with 1,692 career playoff points for the Bucks. He is followed by Sidney Moncrief (1,451), Marques Johnson (1,163) and Bob Dandridge (1,126). Khris Middleton has jumped into 10th place on the list with 684 career playoff points.
•    In the Giannis-era (since the 2013-14 season), the Bucks have now played in seven playoff series… their eighth will be the upcoming conference semifinals against the Miami Heat. In the previous seven series, the Bucks are 3-4 in the first game of the series. In the four series since 2015 where they lost Game One, the Bucks went on to win the series twice.
•    Ryan Braun recently became the 119th player in MLB history to have 800 or more extra base hits in a career. Of those 119 players, 68 are currently in the Hall of Fame. Braun is only the second Brewers player to reach 800 career extra-base hits; Robin Yount had 960 with the club. Can you name the other three Brewers players who ended their careers with the team with 500 or more career extra-base hits? The three: Paul Molitor (651), Cecil Cooper (579) and Geoff Jenkins (521).
•    Did you know the Green Bay Packers record for most passing yards in a season-opening game is 333 … held by three different QBs? Lynn Dickey (in 1983), Brett Favre (in 1999) and Aaron Rodgers (in 2013) each passed for 333 yards in a Packers season-opening game. Dickey holds the team record for most TD passes in a season-opening game with five.

Previous: Packers’ Super Bowl odds have taken big hit
Next: NBA history shows Bucks are in a world of trouble