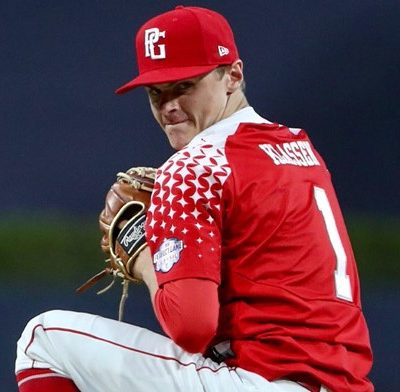 George Klassen has made tremendous strides throughout his high school baseball career. Klassen, a right-handed pitcher from Port Washington, Wisconsin, has always had a long, lean and projectable frame, but over the last four years, he has developed the intangibles required to play at the next level.

Klassen credits his growth on the mound to his pitching coach, Gonzalo Gonzalez, who he has worked with since he was 13 years old, he said. Gonzalez has helped Klassen learn the art of pitching and refined his skills, including his mechanics, Klassen added.

The improved mechanics have allowed Klassen to increase his fastball velocity and command of his pitches. It also has enhanced his status as a baseball prospect, putting him in the mix as one of the top prep players in the country.

“I had a funky arm action,” Klassen said. “Do you know the Iron Mike Pitching Machine? That was me. It wasn’t the best arm action, it wasn’t efficient, and my shoulder was super sore and my chest was sore after throwing. It was going to lead to elbow problems in the future if I kept doing that.

Klassen is a highly-regarded prep prospect who is in the mix to be selected in the MLB draft, which begins June 10.

In a normal year, Klassen likely would have heard his name called in the top 10 rounds of the draft. But this year isn’t like previous years. Klassen might not be drafted due to Major League Baseball cutting the draft from 40 rounds to just five and since he’s a right-handed prep pitcher — the riskiest demographic — who pitched just two innings this spring.

Major league teams also will have to contend with his commitment to the University of Minnesota. Playing three years at Minnesota could be a valuable experience for Klassen, who is 6-foot-2, 167 pounds and possesses plenty of raw skills on the mound.

Minnesota has shown a strong ability to develop high-potential, slightly undersized right-handed pitchers. Over the last three years, the Golden Gophers have developed righty Max Meyer from a promising prep hurler into a top draft prospect. Meyer is 6-0, 185-pound right who likely will be a top-10 pick after being a 34th-round pick out of high school in 2017.

Regardless of how the draft pans out, Klassen is eager for the next step in his baseball career.

“That’s the big discussion at the dinner table,” said Klassen on the draft. “I would love to go pro but I’d also love to go to Minnesota. It depends on the money I get offered. Physically, I also am not the biggest kid. If I go to Minnesota for three years and they put some weight on me and help me develop, I could be 10 times the player I am right now for all we know.”

Last year, Klassen thrived at Port Washington High School, recording 56 strikeouts and allowing just 10 hits in 22 innings. He also pitched in the Perfect Game All-American Classic at Petco Park in San Diego last summer where struck out one batter and allowed one walk in one inning of work.

Klassen uses an overhead windup and throws a four-seam fastball, two-seam fastball, spike curveball and split changeup from a three-quarters arm slot. He consistently sits in the low-90s with his fastballs but likely will increase his velocity as he matures physically.

He mostly relies on his fastball-curveball combination and occasionally mixes in his changeup.

“My mental side is my biggest strength,” Klassen said. “In the back of my mind, I am always thinking that I’m going to be better than this hitter and that I just want to overwhelm him.

” I just want to make sure he knows that I’m not afraid to throw against him. I have tunnel vision to the catcher and that helps my focus.”

Klassen hopes to improve his changeup, especially since he hasn’t thrown the pitch consistently due to the lack of high-caliber high school talent he’s faced in Wisconsin. He also wants to refine the control of his pitches, he said.

“I want to work on the changeup,” Klassen said. “I can throw it well, but sometimes it’s just not there some days. I want to figure that out. That’s been going well. When I play catch with my dad or just throw against the net, I have that in the back of my mind on trying to get it right.”

Klassen had originally committed to Purdue University. But Purdue experienced changes on its coaching staff when coach Mark Wasikowski departed for Oregon on June 11, 2019. One day after Wasikowski accepted the coaching job at Oregon, Klassen announced his decommitment from Purdue. Klassen then committed to Minnesota about one month later.

With Klassen’s senior season of baseball cut short due to the coronavirus pandemic, he is training on his own in preparation for the next step in his baseball career.

He does weight training in a barn at his family’s home and recently built a pitching mound with his father so he could throw bullpen sessions. He also is working out at GRB Academy in Wisconsin.

“As soon as I tweeted out from Purdue, I got a call from (Minnesota) pitching coach Ty (McDevitt) saying he saw that I decommitted and told me his offer still stood,” Klassen said. “I loved Minnesota. It was like neck and neck between Purdue and Minnesota. I liked both pitching coaches equally, but at the time, I felt Purdue was better for me.

“I love Minnesota. My sister goes there, and there is a tree of people in my family who have gone there. The coaches are great, the city is great, it is a nice environment. I fell in love with the school and program.”

Previous: Trivia time: Can you name the Brewers with the most Opening Day starts at each position?
Next: For some NBA head coaches, the resumption of the season is risky