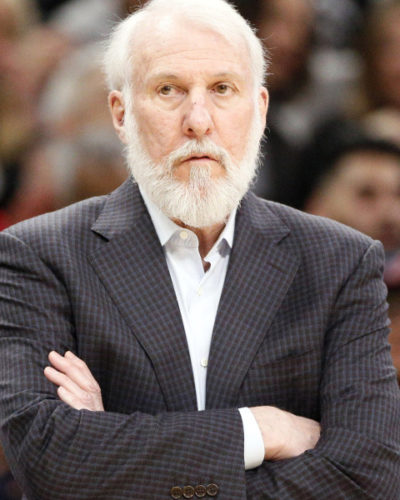 Home » Gery's Blog » For some NBA head coaches, the resumption of the season is risky

According to the Centers of Disease Control and Prevention, individuals who are 65 and older are at a higher risk for severe illness and death from COVID-19.

When the NBA is expected to resume its 2019-2020 season later this month in Orlando, a slew of participants will fall into that “high risk’’ category. That includes several head coaches and assistant coaches who will be directly involved in games and practices.

There are three head coaches who fall into the high risk category: San Antonio’s Gregg Popovich, Houston’s Mike D’Antoni and New Orleans’ Alvin Gentry. Popovich is 71, D’Antoni is 69 and Gentry is 65.

While the CDC’s “high risk’’ age starts at 65, there are some medical officials who believe it is 60. In that case, there are two other NBA head coaches who will have to be extremely careful of contracting the virus: Portland’s Terry Stotts, who is 62, and Dallas’ Rick Carlisle, who is 60.

Detroit’s Dwane Casey is 63 and the only other NBA head coach who is older than 60. However, Casey’s Pistons aren’t one of the 22 teams that will compete in Orlando.

Here are the ages of the other 24 current NBA head coaches:

End of an amazing run

With the NBA expected to play eight more regular-season games, Gregg Poppovich’s amazing string of winning seasons is about to end.

Poppovich’s Spurs are 27-36, meaning even if they won all eight of their remaining games, they’d finished at 35-36. That would snap an amazing 22-year season run in which Poppovich’s teams posted winning records.

You can safely assume the eight NBA teams that won’t be participating in the resumption of the NBA season are hardly distraught. As one team official noted, “I don’t want anything to do with what’s going to go on down here (in Orlando).’’

There have been discussions those aforementioned teams will be allowed to bring their players to their respective facilities to work out and try to stay in reasonably good shape.

My personal opinion is the NBA should have either allowed all 30 teams to partake in Orlando to finish the regular season or better yet just went directly into the playoffs – just like the NHL.

Orlando by the numbers

Barring a last-minute change, each team will be allowed to bring 35 employees to Orlando. Thus, there would be a total of 770 representatives from the 22 teams.

If Mike D’Antoni doesn’t return to coach the Rockets next season, he isn’t likely to be out of a job for long. I’ve been told a few teams, including two that are playoff bound, would be more than delighted to hire him.

Previous: Port Washington’s George Klassen makes a strong pitch to be selected in MLB draft
Next: With no homecourt advantage, Bucks could be in trouble