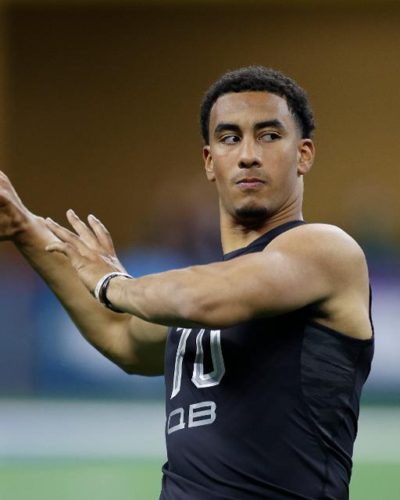 Home » Gery's Blog » NFL scout on Jordan Love: ‘I wouldn’t have touched him in the first round’

If you thought the Green Bay Packers’ draft was perplexing, you aren’t alone.

Now, more than two months since the Packers moved up in the first round to select Utah State quarterback Jordan Love, some NFL player personnel officials are still baffled as to why Packers general manager Brian Gutekunst made the move.

A well-respected scout, who has worked in the NFL for almost three decades and who has frequently lauded Gutekunst’s work, acknowledged having serious reservations about the Packers’ 2020 draft.

“I thought Gutey did well with his first two draft,’’ the scout said. “I thought he really got some good DBs like (Jaire) Alexander and (Darnell) Savage with his picks and I still really like Rashan Gary, even though he didn’t do much last season. They need Rashan Gary to pick it up. I loved him when he came out (for the 2019 draft). They got to line him up and turn him loose.

“I was surprised and couldn’t understand how they played him last season. I’m telling you, Gary’s a talent. Overall, Gutey has done a good job of fortifying that defense.’’

But Gutekunst clearly focused on fortifying the Packers’ offense this year. Besides selecting Love and Dillon in the first and second round, respectively, Gutekunst tabbed Cincinnati tight end Joviah Deguara in the third round. In fact, six of the Packers’ first seven selections were offensive players.

But the aforementioned scout, who gave Gutekunst high grades for his draft work in 2018 (B) and in 2019 (A-), wasn’t as effusive in his grades this year.

“I’m not really fired up by any of those guys they drafted,’’ the scout said. “I think their draft wasn’t very good. I thought it was like a C-, to be honest with you.’’

While giving Gutekunst a below-average grade on his year’s draft, the nevertheless somewhat defended Gutekunskt. The scout noted how the Packers, passed on some internal candidates and hired Milt Hendrickson as the team’s director of football operations in January.

“I think Gutey has done a pretty good job up there (in Green Bay), but I look at this draft and I don’t know what happened,’’ the scout said. “They hired a new guy and there’s some dissension among his staff.

“To me, it’s a divided staff right now, and I think this draft might have showed that a little bit. They probably have a lot of different opinions and that can complicate things.’’

Whether that was the case, there isn’t any question Gutekunst’s selection of Love and, to a lesser extent Dillon, raised a lot of eyebrows in NFL circles.

I asked the scout to break down the Packers draft with his personal evaluation of each pick. He didn’t pull any punches.

SCOUT’S COMMENTS: “The guy has talent; he’s got all the physical tools. But when you have question about a guy’s mental makeup and instincts and all that, that’s a problem. I just think there’s some question marks about the intangibles, which are so important, and when you have questions about that, especially for a quarterback, you better be careful. You want your leader to be A-plus in everything he does. Not everybody is going to be Drew Brees or Aaron Rodgers or Patrick Mahomes, but there were red flags with him. And he threw a lot of picks this season; he was all over the place with the ball. He made a lot of bad decisions.

“If you look at his best stuff (on film), you can become enamored with him. We had a couple of guys on our staff who did that and they put big grades on him. I can’t second guess them because the guy has talent, he really does.

“He’s just the type of guy you can’t really trust. I couldn’t personally trust him. Like I said, I don’t like the mental part of his game, his instincts, the intangibles. I wouldn’t have touched him in the first round.’’

SCOUT’S COMMENTS: “I didn’t like him. He’s not a power back, and he’s not a third-down back. He’s not going to help you in the passing game. He’s kind of a downhill guy and he’s not really quick or explosive. He had all this production because he’s a big guy.

“They’re probably hoping, not that’s he going to be Eddie George, that he’ll be a big banger. But he’s not very tough. He’s a kind of a finesse 250-pound guy. If a 250 pound guy is a finesse guy, that’s a red flag. He’s not going to move bodies. This is not the guy at Tennessee (Derrick Henry). He’s not that at all.

“He has no quickness and he’s speed deficit. No. I wasn’t a big fan. We had one guy (scout) who had a big grade on him but everybody else on our staff saw him like I saw him. So that pick is a little shaky, too.’’

SCOUT’S COMMENTS: “That guy’s not bad. He’s a pretty good receiver, not much of a blocker. That could end up being a decent pick for them. He can catch, he’s competitive and he’s tough, has good hands, runs good routs. And he’s a smart kid.

“He could help them; they need help there (at tight end).’’

SCOUT’S COMMENTS “You know what, for a fifth-round pick, he’s not bad. He’s got versatility, he’s smart, he’s kind of an in between inside-outside guy. He doesn’t do anything really well.

“But he has some size to him. Not great in coverage. Pretty good run support guy, But he has a really bad body. His legs are so skinny. Normally, linebackers have more thickness to them. His body type looks like a guy who’s going to stay hurt.

“But he’s got some developmental tools. That wasn’t a bad pick there; there’s not a ton of linebackers at that point of the draft. ‘’

SCOUT’S COMMENTS:  “He lined up at left tackle and he didn’t do badly. I actually thought he was a little underrated. But he’s more of a guard. His arms are kind of short to play tackle. They could move him to guard or center.

“He’s one of those versatile, utility guys who hang-around-the-league for a while. He’s smart, he’s ornery. He’s got that competitive demeanor like his dad had. That’s a decent pick. I kind of like him.’’

SCOUT’S COMMENTS: “I think he’s a fringe guy, kind of a practice squad guy, more or less. There’s nothing that sticks out about him except that he’s smart and sometimes that’s all you need.

“But he didn’t do anything that jumped off the tape. He’s an average run blocker, he needs to get bigger; he’s not very big. I guess they think he’s versatile. They’re trying to get guys to fortify their line a little bit, to get some depth there. But he’s just a run of the mill type of guy.’’

SCOUT’S COMMENTS:”I don’t know much about him. I know we weren’t going to draft him.’’

SCOUT’S COMMENTS: “I did some reports on some of those (TCU) guys, but I didn’t do one on him. We didn’t have him on our draft list. We had him as a free-agent guy.’’

SCOUT’S COMMENTS: “I saw little bit in (pre-draft) meetings. He’s been a little of an underachiever. He’s got some athletic tools, some length. A developmental guy, too. It’s hard to find pass rushers down in the late rounds. We didn’t have him graded very high. I think they just took a wild shot on a guy.’’

Previous: A blast from the past: Breaking down the epic McGwire-Sosa home run race
Next: Is it inevitable the NBA’s ‘bubble’ will burst?