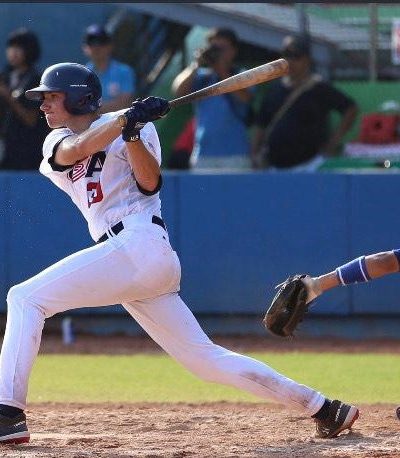 AJ Vukovich is used to being in the spotlight. The senior at East Troy High School has competed in baseball showcase events around the country throughout high school and even played internationally with the U.S. national team last summer.

Vukovich, a Mukwonago native, is of the top baseball prospects in the 2020 recruiting class. He also is a high-end prospect for this year’s MLB draft, considered by scouts as an early-round pick with the potential to hear his name called as soon as the second round.

He’s the latest Wisconsin prep prospect who is highly sought after by major league teams, following in the footsteps of Gavin Lux and Jarred Kelenic.

This year’s draft process has been unlike previous years. With the coronavirus pandemic, this year’s draft likely will be shortened from its usual 40 rounds to maybe as few as five rounds.

Even with some uncertainty with the draft and his inability to play this spring, Vukovich is eager for the next step in his baseball career, whether that’s the professional ranks this summer or with the University of Louisville in the fall.

“As of now, I always know I have Louisville and that’s all I have to me right now,” Vukovich said. “Eventually my goal is to play professional baseball, whether that’s now or after college. Being a senior and being in this situation is pretty cool. I’m just looking forward to going through the experience.”

Vukovich isn’t just a one-sport star. Throughout high school he also excelled on the hardwood, eclipsing 2,000 career points during his senior season in February.

With specialization, it’s common for high school baseball stars to quit other sports and focus solely on baseball. But it was important for Vukovich to play all four years of high school basketball for East Troy.

Vukovich made this year’s second-team all-state roster after averaging 27.9 points per game.

“There is something about high school basketball around here and the competitive nature,” Vukovich said. “There is nothing better than going out there and competing for your town and wanting to win a state championship with the guys you grew up playing with. It’s really helped me with my athletic ability and it has carried over to baseball.

“Just the explosive movements in basketball, whether you are going up for a dunk or trying to defend someone, it’s similar to going after a fly ball or ground ball. It’s really helped me stay in shape, help my athletic ability and kept my competitiveness going year-round.”

His basketball skills have aided him on the baseball diamond, especially defensively over the last year as he’s switched positions.

The 6-foot-5, 210-pound right-handed hitter is known for his power due to his long levers, strength and bat speed. He finished second to slugging prep first baseman Blaze Jordan at the High School Home Run Derby at the All-Star Game last July.

He isn’t simply just a power hitter, however. He consistently barrels up pitches and drives the ball to all fields.

Vukovich hit just .167 during the World Baseball Softball Confederation U-18 Baseball World Cup in South Korea last September. Although he understands the criticism, he also is quick to point out how he was “on fire” in the U.S. national team tryouts and during the two weeks before the World Cup.

Vukovich went hitless in four at-bats in the U.S. national team’s first game in the World Cup, which Vukovich believes led to him pressing a bit at the plate. He’s used the World Cup as a learning experience on how to “let the game come to you,” he said.

“My bat is the biggest part of my game,” Vukovich said. “Hitting for power to all fields is also a strength of mine. Last summer, I’d say about 80 percent of my home runs were to the opposite field. That’s something I’ve really worked on, so that’s a big plus for me. That’s something a lot of guys at this age don’t have I feel like.”

Vukovich has grown up playing in the infield, but he believes his long-term position is in the outfield. Last year, he started every game in right field with the U.S. national team.

He feels the outfield is a natural fit for him due to his athleticism and strong arm. As he continues to refine his defensive skills, Vukovich wants to work on his reads off the bat, routes to the ball and footwork.

“I see myself more as an outfielder – a power-hitting outfielder,” Vukovich said. “I just think with my athletic ability that it feels more natural out there. Mostly in the corners, but the more I work on it, you never know center field could be a possibility. But as of now, it’s a corner spot.”

Vukovich credits his development into a highly-touted baseball player to Hitters Academy in Caledonia. He’s attended Hitters Academy since he was in eighth grade and has worked with coach RJ Fergus.

Throughout high school, Vukovich played for Hitters Academy instead of his high school team. He knew competing on a travel team would enhance his development. The decision paid off for Vukovich immediately, as he was on the radar of college programs shortly after joining Hitters Academy. He verbally committed to Louisville in the fall of his freshman year, he said.

Lux and Kelenic also trained at Hitters Academy. Lux was the 20th pick by the Los Angeles Dodgers in 2016, and Kelenic was the sixth overall pick by the New York Mets in 2018.

Alex Binelas, who’s a former Oak Creek standout and currently plays at Louisville where he’s transformed into a top prospect for the 2021 draft, also works out at Hitters Academy.

“They have meant a lot to me,” said Vukovich on Hitters Academy. “RJ does a really good job, and I wouldn’t be where I am today without Hitters. RJ has done a great job just giving me the opportunity to play in front of tons of scouts.

— Photo courtesy of the Vukovich family

Previous: Packers have seldom made wide receivers a priority in the draft
Next: Inside some of the numbers from The Last Dance