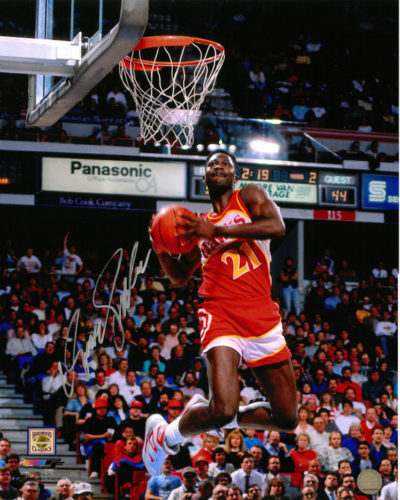 Dominique Wilkins is a Hall of Famer, selected in 2006. He averaged 24.8 points per game and was a nine-time All-Star. Based on researching some numbers from his career, he may been one player who when he played against Michael Jordan and the Bulls, really elevated his game when facing basketball’s GOAT.

During those Jordan-Bulls years, there were 24 times (by 16 different players) when an opposing player tallied 40 or more points in a game versus Jordan’s Bulls. Of those 24 times, Wilkins scored 40+ points against the Bulls five times, most of any rival player.

Here are the players who scored 40 or more points in a regular season game versus the Bulls during the years Jordan played with the team.

Wilkins tops the list with the most points scored by a player in a game versus the Bulls with Jordan on the roster. Wilkins scored 57 points in a December 10, 1986 game. Adrian Dantley is second on that list with a 45-point game against the Jordan-led Bulls.

If we look at which opposing players had the most 30-point games versus the Bulls from 1984-85 to 1997-98, again Wilkins tops the list with 23 such games. Barkley and Larry Bird follow Wilkins with 13 games and Ewing had 10.

Only one other opposing player had a 50-point game in a contest with Jordan playing. Kobe Bryant had 55 in a March 28, 2003 game between the L.A. Lakers and Washington Wizards. Jordan was a member of the Wizards and tallied 23 points in that game. Orlando’s Tracy McGrady had 50 points in a March 8, 2002 game against the Wizards, but Jordan did not play in that game due to an injury.

The numbers seem pretty clear… Dominique Wilkins seemed to raise his game to another level when he was on the same court as Jordan. For his career, Wilkins averaged 27 points versus the Bulls in 66 total games, second-most versus any team (he averaged 27.2 points per game against the Kings in 27 contests).

Previous: Some MLB teams may have missed playing games more than others
Next: Dan Devine’s bold, controversial move paid off big time for Packers