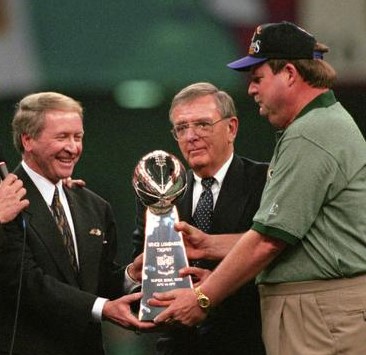 Some news and views while wondering when we’ll see a sell-out crowd at a professional sporting event again:

Reinsdorf’s bold and controversial move reminded of when, back in 1971, then Packers coach and general manager Dan Devine hired a young and driven public relations director for the St. Louis Cardinals baseball team to be the Packers assistant GM.

Devine also took a ton of heat on that move, but hiring Bob Harlan proved to be one of the shrewdest moves ever in Packers history. Every time I wander into Lambeau Field, one of the most iconic sports venues on the planet, I immediately think of Harlan and all of the hard work invested into having the facility renovated.

While transforming Lambeau Field from a drab stadium into a state-of-the-art one may been Harlan’s crowning achievement with the Packers, he made a spate of other notable decisions, including the hiring of Ron Wolf as general manager who, in turn, traded for Brett Favre. The rest was history.

With Aaron Rodgers still playing at a high level and having plenty of fuel in his tank, who knows if Love will ever even play in Green Bay and, if he does, if he’ll be any good. One can safely assume Love better pan out in Green Bay or Gutekunst days there will be numbered.

Favre had publicly hinted at possibly retiring on several occasions and Rodgers was regarded as one of the prized prospects in the draft and miraculously fell to the Packers. It was a no-brainer to take him.

NBA games, unlike Major League Baseball and NFL games, are held in relatively small, compact arenas. The vast majority of NBA arenas have seating capacities between 17,000 to 22,000. With social distancing in place, it’s hard to imagine any NBA game drawing even 10,000 fans.

Until a vaccine comes along and/or players submit to drastically reduced contracts, it’s inevitable NBA teams are going to struggle to survive, much less thrive. It’s no wonder why I’m hearing whispers some NBA owners are looking to sell.

Snell, who was scheduled to make a “paltry’’ $7 million this season, should be on his knees every night thanking the Lord for the job he has and be reminded more than 30 million Americans have filed for unemployment claims and millions of others are clinging on to their jobs.

In fact, the last NL player to string together as many batting titles was San Diego’s Tony Gwynn, who won his fourth straight title in 1997.

The last three-peat batting champ was Detroit’s Miguel Cabrera from 2011-2013.

In this year’s draft, whenever that is held, Tyrese Haliburton is a lock to be chosen in the first round. Haliburton, who was born in Oshkosh and attended Oshkosh North High School, played the last two seasons at Iowa State and is generally regarded as a lottery pick (a top 14 selection).

And you can look for two more Wisconsin prep products to be chosen in the 2021 and 2022 drafts: Jalen Johnson, who was a star at Nicolet H.S. and now bound for Duke, and Patrick Baldwin Jr. of Sussex Hamilton H.S. Each has a legit chance of being a lottery pick.

That’s great. I’m sure every parent in America can’t wait.

Previous: Michael Jordan brought the best out in Dominique Wilkins
Next: It’s obvious who the Brewers’ best player of the last decade is, but who is No. 2?