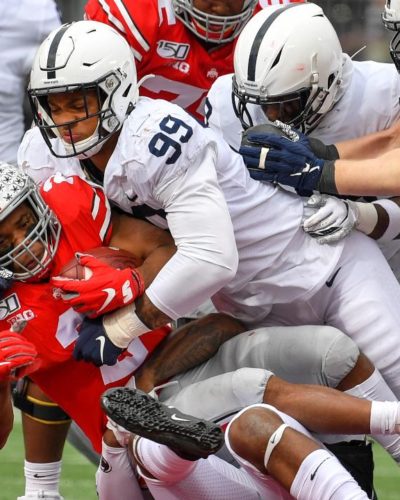 Home » Gery's Blog » Could the Packers use another first-round pick on a defensive player? Don’t rule it out

If you didn’t know better, you would have thought Mike Pettine was the Green Bay Packers defensive coordinator … and general manager.

That’s because the Packers have acquired a preponderance of defensive players either through free agency or the draft in the last two years, or ever since Pettine took control of the defense in Green Bay.

In the 2018 draft, the Packers used their top three picks on defensive players: cornerback Jaire Alexander in round one, cornerback Josh Jones in round two and linebacker Oren Burks in round three.

In the 2019 draft, the Packers used their top two picks –both in the first round — outside linebacker Rashan Gary and safety Darnell Savage.

In fairness to Pettine, the Packers expending premium picks to shore up a shoddy defense was a carryover from the previous two years. To wit:

In the 2016 draft, the Packers picked nose tackle Kenny Clark in the first round and linebacker Kyler Fackrell in the third round. They also selected linebacker Blake Martinez and defensive end Dean Lowry in the fourth round.

And, in 2017, the Packers selected cornerback Kevin King in the first round, safety Josh Jones in the second and defensive tackle Montravius Adams in the third round. They also selected linebacker Vince Biegel in the fourth round.

Do the math and you’ll see the Packers drafted 10 defensive players in the first three rounds of the last four drafts. But the Packers’ hell-bent obsession to upgrade their defense was especially conspicuous during free agency last year.

Considering the massive influx of defensive players in the last four years, you’d assume Pettine’s defense would be good to go.

As the San Francisco 49ers painfully pointed out in last season’s NFC Championship game, when they moved to a commanding 27-0 halftime lead en route to a 37-20 butt-kicking, the Packers’ defense had some gaping holes.

The 49ers thoroughly exposed the Packers’ glaring weaknesses at the first two levels, bludgeoning the Packers with an insane 285 yards on the ground.

The 49ers showed how the Packers’ defensive ends – Lowry and Tyler Lancaster – are average performers, at best. Lowry ranked ninth in tackles last season with 47 and didn’t have a sack. Lancaster finished 14th on the team in tackles with 30. He had a mere 1.5 sacks.

With their first pick –the 30th overall — in Thursday night’s draft, the Packers may be tempted to draft a DE for their 3-4 package, especially if former Penn State standout Yetur Gross-Matos (pictured above) is still on the board.

Gross-Matos, who has a high motor and can get after the quarterback, figures to go in the lower-third of the first round from 20-30.

Said a veteran AFC scout: “I love Gross-Matos. “He could slip a little bit because of all the good defensive backs and offensive tackles in this draft; he could be there for Green Bay. But he’s damn good. He’s a stud.’’

The Packers’ exhibited their interest in Gross-Matos by formally interviewing him at the NFL Combine in Indianapolis. Asked about meeting with the Packers, the 6-5, 266-pound Gross-Matos said, “I thought it went well. I hope they say the same thing.’’

Three other fine defensive ends are projected as late-first, early-second round picks: A.J. Epenesa of Iowa, Ross Blacklock of Texas Christian and Marlon Davidson of Auburn.

“He’s productive, steady,’’ an NFC scout said. “He brings it every play. He’s just not explosive enough for me.’’

As for Davidson, the scout said: “He could be a good fit for them (the Packers) in their schemes. He’s versatile; he could play outside and inside.’’

“That would be a hell of a pick for them,’’ the NFC scout said. “He can play on the nose and he play on the outside. We (his team) have him as the second best interior guy in this draft after Derrick Brown.’’ Brown, from Auburn, is generally regarded as a top seventh pick.

One scout contacted Wednesday said Blacklock’s draft range is from 20-32.

Besides defensive end, the Packers have another area on their defense that clearly needs to be addressed: inside linebacker. The Packers let both of their starting linebackers from last season walk in free agency, with tackling machine Blake Martinez going to the New York Giants and Goodson going to Cleveland.

Losing Martinez, who led the Packers in tackles last season with 155 tackles and was second in the league to Seattle’s Bobby Wagner (159), could be regrettable. Losing Goodson, who ranked just 11th in tackles with 37 tackles and didn’t register a single sack, shouldn’t be that big of a deal.

The Packers hope to plug the hole left by Martinez with the signing veteran Christian Kirksey, who played all six of his pro seasons with the Cleveland Browns.

“Kirksey is a good player; he’s a starter, for sure if he’s healthy,’’ an NFL scouting director said when the Packers landed Kirksey. “They took a gamble but it’s not a bad gamble on him. It’s just that he missed a lot of time the last two years.’’

He sure did. Plagued by injuries, Kirksey played only two games last season and seven the previous season. He did play all 16 games his first four seasons with the Browns and started all 16 in the 2016 and 2017 seasons.

As for the rest of their inside linebackers corps, Burks has yet to prove he can stay healthy and Ty Summers, a seventh-round pick in 2019 who came off the bench in 16 regular season games, remains a project.

Suffice to say, the Packers’ inside linebackers situation is precarious. They will undoubtedly have to draft another one, perhaps even at 30 if Kenneth Murray of Oklahoma or Patrick Queen of Louisiana State is still on the board.

Both Murray and Queen seem to have the whole package with strength and speed. Most scouts rate Murray ahead of Queen because of his intelligence to run the defense. Some scouts also say they’re concerned about Queen’s focus and tendency to take some plays off.

As such, it isn’t likely Murray will slip to the Packers at 30. But some NFL officials believe Queen could slide and even fall into the second round. Queen’s first formal interview at the Combine was with the Packers.

A wild-card could be former Wisconsin standout Zack Baun. There are those who contend Baun is capable of playing outside and inside linebacker at the pro level. But some scouts vehemently disagree, saying Baun is undersized to play inside.

“He played inside at the Senior Bowl and he was pretty good,’’ an NFL executive said. “Personally, I think’s better outside. To me, he’s just not big enough to play inside. He doesn’t have the frame to do that.’’

Baun, who was measured at 6-2 and weighed 238 at the Combine, was once a virtual lock to be a late first-round pick and, at worst, a high second-round selection.

But he reportedly tested positive for a diluted sample at the Combine and an NFL scouting director said Tuesday he could still see Baun going late in the first but wouldn’t dismiss the possibility of him dropping into the middle of the second round.

The prevailing feeling among many NFL officials is the Packers will target a wide receiver with their first pick, but if Murray, Gross-Matos or Blacklock, in particular, would unexpectedly fall to them, they could wind up taking a defensive player — yet again.

Previous: Zielinski: Higgins would be a great catch for Packers
Next: Could the Packers give Aaron Rodgers two presents in the draft?