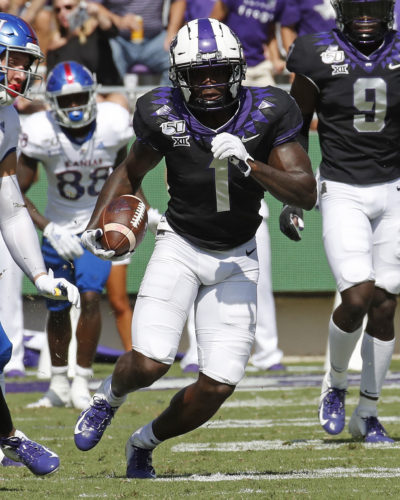 Home » Uncategorized » Could the Packers give Aaron Rodgers two presents in the draft?

Let’s make this perfectly clear: If the Green Bay Packers want a stellar receiver in tonight’s draft, they can get one.

And they don’t have to move up to get one.

The Packers can simply stay where they are in the first round with the 30th overall pick and automatically land a badly needed complementary receiver to standout Davante Adams.

It’s a testament to the richness of this year’s class of receivers. While Alabama’s Jerry Jeudy and Henry Ruggs III, Oklahoma’s CeeDee Lamb and LSU’s Justin Jefferson are the cream of the receiving crop and are expected to be long gone by the time the Packers make their first selection, the Packers still figure to have their choice of at least five and maybe even six standout receivers who could become potential NFL stars.

That group of receivers could include Brandon Aiyuk of Arizona State, Denzel Mims of LSU, Jalen Reagor of Texas Christian, Laviska Shenault Jr. of Colorado, Tee Higgins of Clemson and Michael Pittman of Southern California.

Talk to any NFL official and they’ll say the odds are overwhelming the Packers will wind up with one of the aforementioned receivers.

You can make a compelling case as to why each of those receivers would be welcome additions in Green Bay, But in conversations with several NFL officials and agents, it seems like the Packers, if they remain at 30,  have Reagor (pictured above) and Shenault at the top of their wish list.

The 5-11, 195-pound Reagor is a playmaker in the truest sense. His athleticism is exceptional: He went 11-6 in the broad jump at the Combine, which was the best among all the receivers there, has a crazy 42-inch vertical jump and was timed at 4.2 seconds in the 40-yard dash on his pro day.

Reagor could also be a major weapon in the return game. Last season, he returned two punts for a touchdown.

While Shenault doesn’t have Reagor’s speed, he is an equally exciting playmaker, capable of taking it to the house any time he touches the ball.

One of Shenault’s biggest strengths is his strength. With a thick, sculpted frame, some scouts said the 6-1, 227-pound Shenault reminds them somewhat of former Packers star Sterling Sharpe.

Shenault is such a powerful runner that he was frequently used in the wildcat formation at Colorado. Seven of his 17 career touchdowns came as a running back.

Shenault told some friends at Colorado last season that he would relish playing in Green Bay, believing he would fit in nicely with Adams and Rodgers.

At the Combine, Shenault reiterated those feelings.

“Rodgers is great,’’ Shenault said. “Who wouldn’t want to play with Rodgers? Along with Adams? A great receiver. I’d love to learn from him.’’

While much of the talk about the Packers’ first-round pick revolves around receivers, there are whispers the Packers might opt drafting a receiver in the second round and use their top pick at 30 on a tight end.

Sternberger endured an injury-laden rookie season, playing only six games and failing to make catch during the regular season He had three catches in the playoffs.

While Sternberger could eventually become a fine pass receiver, there are serious concerns about his blocking, especially for a team that is now placing more of an emphasis on the run game.

The Packers two other tight ends on their roster are Marcedes Lewis, who is 35 and managed only 15 receptions last season, and Robert Tonyan, who had a paltry 10 catches last season.

If the Packers drafted a tight end with their top pick, Cole Kmet of Notre Dame would be the candidate. He would be a clear upgrade at the position.

Even though most mock drafts don’t have him going in the first round, several teams have first-round grades on Kmet and are convinced he could become a top-tier tight end.

Indeed, there are striking physical similarities. Both played at Notre Dame, both are 6-6 and Rudolph weighs 265 pounds, just three pounds lighter than Kmet.

“Tight end is a big need for them,’’ a veteran scout said of the Packers. “Even if Sternberg develops, they need another tight end.

“I like Kmet; he’d help that offense. But I think he’s probably going to be gone before the Packers pick. I have him going between 21 and 31.

While the Packers are almost certain to address their receiver and tight end needs in this draft, they are also in the market for an offensive tackle. They interviewed several offensive tackles at the Combine, including Joshua Jones of Houston, Ezra Cleveland of Boise State, Isaiah Thomas of Georgia and Austin Jackson of Southern California. All are expected to be drafted in the vicinity of the Packers’ pick at 30.

Previous: Could the Packers use another first-round pick on a defensive player? Don’t rule it out
Next: Gutekunst fumbles the ball by picking Love