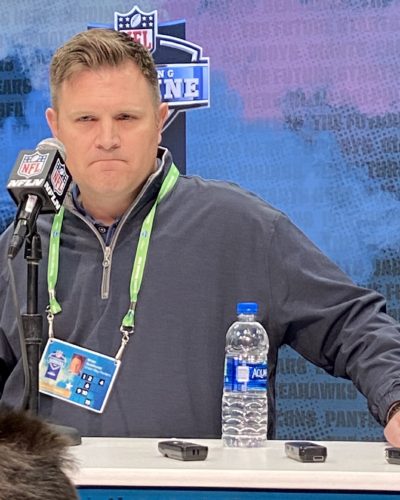 When the word started to spread around NFL circles earlier this week that the Green Bay Packers were on a mission to move up in the NFL draft, it made all the sense in the world.

The overwhelming sentiment among several NFL officials was the Packers either wanted to nab one of the elite receivers in this embarrassingly rich receivers draft, or select a much needed inside linebacker.

On the receiving front, it was a lock Alabama’s Henry Ruggs III and Jerry Jeudy and Oklahoma’s CeeDee Lamb wouldn’t still be on the draft board even if the Packers traded up into the early 20s from their 30th spot.

But there were probably going to be several other tantalizing possibilities, including Justin Jefferson of LSU, Brandon Aiyuk of Arizona State and Jalen Reagor of Texas Christian, who I personally thought would have been an ideal fit for the Packers with his explosive capabilities not only as a receiver but as a returner.

On the inside linebacker front, two of the draft’s best at the position –Kenneth Murray of Oklahoma and Patrick Queen of LSU –seemed like logical candidates for the Packers as well, if they moved up.

But when the Packers did move up, acquiring the 26th overall pick from Miami, all of those players except Queen had been drafted: Reagor to Philadelphia at 21, Jefferson to Minnesota (via a trade with Buffalo) at 22, Murray to the L.A. Chargers (via a trade with New England) at 23 and Aiyuk to San Francisco (via a trade with Minnesota) at 25.

Of course, the Packers used the 26th pick on Utah State quarterback Jordan Love, a raw but unpolished gem who figures to be the heir apparent to Aaron Rodgers.

The question some NFL observers immediately asked was this: Is Love really the guy Gutekunst had targeted by moving up? Or did Gutekunst simply miscalculate? Did he believe one of those aforementioned receivers or Murray would still be available for him at 26?

Certainly, Gutekunst was acutely aware of how critical it was for him to plug as many holes on the roster as possible if the Packers are to make another NFC Championship game appearance or Super Bowl run. And there weren’t any bigger craters to be filled than inside linebacker and receiver.

Gutekunst had a golden opportunity to address the former weakness. Immediately after drafting Love, Seattle chose Jordyn Brooks of Texas Tech, an inside linebacker. Then, after the Seahawks picked Brooks, Baltimore selected Queen, an inside linebacker. One can safely say that if Brooks and Queen were good enough for the Seahawks and Ravens, two of the best organizations in the NFL, they would have been good enough for the Packers.

It also goes without saying Brooks and Queen would have improved the Packers’ sieve-like run defense, one that surrendered an absurd 285 rushing yards to the 49ers in the NFC Championship game.

Brooks or Queen would have been instant starters, which isn’t going to be the case with Love. Rodgers is firmly ensconced as the Packers’ starting quarterback and he’s just 36. His isn’t even remotely close to being on E. In today’s NFL, quarterbacks now play into their late 30s or beyond. Exhibit A: Tom Brady, who will be 43 in August. Exhibit B: Drew Brees who is 41.

Barring something unforeseen, Rodgers isn’t going anywhere and Love figures to languish on the bench for years to come. He’ll need that time. While he possesses some admirable qualities with a big arm, excellent athleticism and intelligence, his decision-leaves a lot to be desired. Jordan played in the Mountain West Conference – a league that shouldn’t be confused with the SEC, Big Ten or Big 12. And, yet, he was a turnover machine last season. He threw 17, repeat 17, interceptions.

Contrast that with Rodgers who, before joining the Packers, threw just 13 interceptions in two seasons at California. He convincingly showed even then that he knew the importance of not being careless with his passes. He’s still that way today. In fact, Rogers has thrown a total of 19 interceptions – in the last FOUR seasons.

Fortunately for Love, he’ll have ample time to rectify his abysmal decision-making and accuracy issues while being an understudy to the hall-of-fame in-waiting Rodgers. Love may even blossom into a star and prove to be a worthy successor to Rodgers, who was a worthy successor to Brett Favre.

Yet, this wasn’t the time for the Packers to draft a quarterback, especially with their first-round pick when a fair share of NFL officials didn’t even regard Love as a first-round talent.

Peter King, the esteemed football columnist who has covered the NFL for more than three decades, did a mock draft on Wednesday and predicted the Packers would take a receiver with their then 30th pick, Michael Pittman of Southern California.

King didn’t nail that pick but he did nail the Packers picking Love. After finishing his top 32 picks, King offered some other opinions, one being “Teams that could take quarterback Jordan Love. Green Bay (62), Pittsburgh (49).

Indeed, the Packers picking Love in the second round with the 62nd pick – or 26 picks later than they did –would have made all the sense in the world.

I’m a staunch Gutekunst supporter; he’s an excellent general manager. He’s made some amazing moves in prior drafts and free agency to get the Packers back on track.

But unless he knows something about Rodgers that we don’t or has a trick up his sleeve to make a prime-time trade for a receiver like Odell Beckham Jr., drafting Love instead of addressing more pressing needs was an egregious mistake.

Previous: Could the Packers give Aaron Rodgers two presents in the draft?
Next: Will Love’s career with Packers be like Rodgers’ … or Tagge’s and Campbell’s?