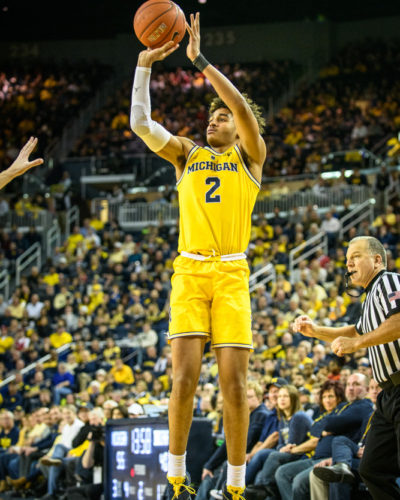 Home » Guest Post » Jordan Poole could be the Bucks’ guy

The Milwaukee Bucks have never selected a player in the first round of an NBA draft who was born and raised in Wisconsin.

Sources claim the Bucks, who have the 30th overall and last pick in the first round, are seriously contemplating selecting Jordan Poole, a 6-foot-5 combo guard from the University of Michigan. Poole was born in Milwaukee and attended Rufus King High School in Milwaukee.

Poole is generally regarded as a late-first, early-second round pick. The Bucks’ interest in Poole was clearly illustrated on Monday when Poole worked out for them for the second time. Most teams don’t work out a player twice unless they have a sincere interest in drafting him.

“We all knew he was a good shooter, but he showed us in our workout that he can do a lot of things pretty well,’’ an NBA executive said. “He’s a better passer than we thought he was and he’s a solid defender.

Only Golden State and Milwaukee have worked him out on two occasions. Poole met with Warriors officials on Tuesday.

Poole, who was measured at 6-5½ in shoes at the NBA pre-draft camp in Chicago last month, started all 37 games for the Wolverines as a sophomore last season. He averaged 12.8 points while shooting 44 percent from the field and 37 percent from 3-point range.

Sources said the Bucks definitely have Luka Samanic, a 6-10 forward from Croatia, on their draft radar.

Samanic worked out for the Bucks on Monday. It was the last of seven pre-draft workouts for him. Samanic, whose strengths are his shooting and versatility, also auditioned for Atlanta (17th pick), Indiana (18), San Antonio (picks 19 and 29), Utah (23), Philadelphia (24) and Golden State (28).

Interestingly, Samanic’s two favorite players are Golden State’s Kevin Durant and Milwaukee’s Giannis Antetokounmpo. The latter, by the way, was working out at the same time Samanic was showcasing his skills for Bucks officials.

“It was pretty cool,’’ Samanic said. “I watched him on TV in the playoffs last month and now I see him in person. Crazy.’’

Checking out their options

Like all of their competitors, the Bucks are exploring various avenues in the draft besides keeping their pick at 30.  To wit:

Every draft has a couple of “wild-card’’ prospects, ones who NBA officials struggle to predict where they’ll be picked.

The 7-foot-2 Bol may be the wildest of the wild-cards.

— Photo courtesy of the University of Michigan athletics

Previous: Bucks give Happ, Cohen III the cold shoulder
Next: No. 1 picks usually don’t stick with their original NBA teams