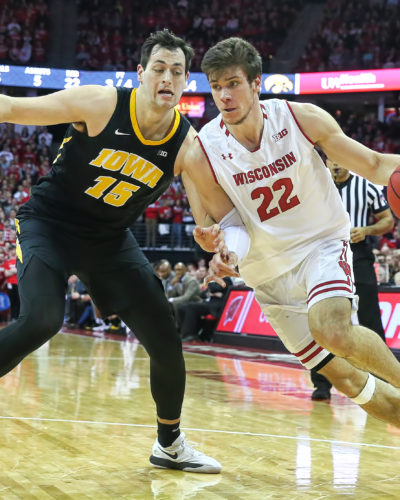 The Milwaukee Bucks are on the brink of ending a franchise long tradition.

For the first time since the inception of the NBA franchise in 1968, the Bucks are not going to work out any of the state’s top draft prospects. The draft is Thursday night.

While neither Happ nor Cohen are projected to be taken in the two-round, 60-player draft, several other NBA teams nevertheless brought both players to their cities for pre-draft workouts.

Happ was one of the most decorated players in Wisconsin history. This season, the 6-foot-10 Happ averaged 17.9 points and 10.3 points per game. He was accorded the Kareem Abdul-Jabbar Award and Pete Newell Big Man Award.

While the Bucks passed on working out Happ, at least six NBA teams have worked him out in recent weeks. Those teams are Chicago, Minnesota, the Los Angeles Clippers, Charlotte, Phoenix and New Orleans.

Cohen, a 6-6 combo guard, also had a strong senior season. He averaged 17.5 points and 6.4 rebounds for the Phoenix last season.

Additionally, Cohen was a Horizon League first team selection, chosen to the CIT all-tournament team and invited to this year’s Portsmouth Invitational Tournament.

Among the known NBA teams that Cohen has worked out for are Cleveland, Indiana and Minnesota. He was also part of a recent group workout in Dallas that featured projected lottery pick Sekou Doumbouya.

Previous: Davis is just what the doctor ordered for ailing Lakers
Next: Jordan Poole could be the Bucks’ guy