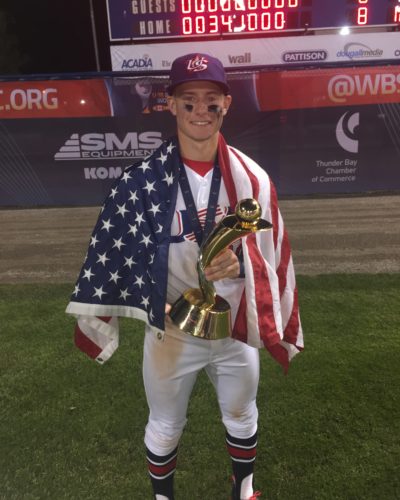 Jarred Kelenic wakes up each morning and heads to STiKS Academy in Waukesha, Wis. The prep outfielder graduated from Waukesha West High a semester early and trains each day at the facility to prepare for his next step in his baseball career.

Committed to the University of Louisville, Kelenic is in a unique situation for a Wisconsin baseball product.

When the MLB Draft begins on June 4, Kelenic could become the state’s highest-ever prospect selected, as there’s buzz that the Detroit Tigers are considering him with the first overall pick. MLB.com ranked Kelenic as the 12th-best prospect in its January rankings.

All 30 major league teams have been to Wisconsin to evaluate Kelenic in preparation for the draft. He said he’s trying his best to avoid the draft chatter and focus on his development.

“It’s truly an honor, but my expectations are a lot higher than anyone can think possible,” Kelenic said. “This is something that’s normal for me. I’ve put in the work and expected the results. I’m getting the results. One day I want to be a hall of famer.”

The state has only produced one top-10 pick in the MLB Draft, as the Toronto Blue Jays selected shortstop Augie Schmidt with the second overall pick out of the University of New Orleans in 1982. Schmidt attended Kenosha Bradford High School and is currently the head baseball coach at Carthage College.

The highest prep player drafted out of Wisconsin was Nekoosa High’s Kevin Brandt, who went 11th overall to Minnesota in 1979. Most recently, Gavin Lux from Kenosha  Indian Trails High School heard his named called by the Los Angeles Dodgers with the 20th overall selection in 2016.

“The draft is just a steppingstone,” Kelenic said. “The older and older I get, I’ve started to realize that it’s just a starting point. From there, it’s getting to the big leagues and winning games. It’ll be a special day.

“At the same time, being from Wisconsin, I don’t know a lot of kids who get this opportunity. I’m going to make sure I don’t take it for granted.”

Kelenic has never suited up for the Waukesha West baseball team, which compete in summer baseball. Instead, he’s spent the summer months playing with travel teams and competing in showcase events across the country.

The last two years, Kelenic played with the U.S. national 18-and-under team. He was the team’s best hitter in 2016 and helped them win their second consecutive gold medal in 2017.

“Having USA across your chest is always something different and nothing I will ever forget,” Kelenic said. “It taught me how to get into a routine and play every single day. It challenged me physically and mentally. Ultimately, I think it was an extreme learning curve in my career playing with Team USA.”

The reason Kelenic is a well-regarded draft prospect is because of his five-tool potential. His best trait is his advanced hitting ability. He displays a solid approach from the left side of the plate and makes consistent, hard contact to all field. He also has the best power-speed combination in the draft class.

Defensively, Kelenic views himself in centerfield long-term due to his quickness, instincts and arm strength.

“I think the biggest strength in my game right now is that I bring all five tools to the table,” he said. “If my hit tool for one game isn’t going the way I want it to, I’m going to make sure my other four are on. I’ve been working extremely hard to make all tools of the game very high and very good.”

Kelenic has been doing hot yoga once a week to help for more flexibility and make him less prone to injuries.

Besides doing individual drills to enhance his skills, Kelenic is also playing with Wisconsin’s Hitters Baseball Academy this spring. The team started playing in March and has games each weekend in Wisconsin and occasionally in Iowa.

Wisconsin baseball players aren’t able to play outside year round, but Kelenic believes that places like STiKS Academy and Hitters Baseball Academy allow athletes ample opportunities to develop their craft.

“I don’t understand why people think we are misjudged because we have the facilities to play every day,” he said. We can get just as much work in as a kid from California or Florida. I took it for what it was worth and knew no one was going to outwork me.”

— Photo courtesy of the Kelenic family