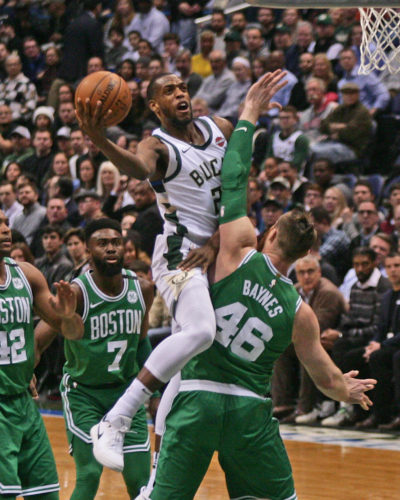 MILWAUKEE – It was about 10 o’clock on Sunday morning – about two hours before the Milwaukee Bucks would host the Boston Celtics in Game 4 of their NBA playoff series –and the Bradley Center was virtually a morgue.

There was little noise in the joint with a smattering of BC workers, media folks and Bucks and Celtics officials going about their business. There was also just one player on the court: Khris Middleton.

The Bucks veteran swingman worked on a variety of moves with Bucks assistant coach Greg Foster and took shot after shot from the perimeter. Not that Middleton really needed to spend any extra time on honing his shot.

Middleton has been in a shooting zone the entire series. For the four postseason games against the Celtics, he is shooting a scorching 61 percent from the field.

He’s been especially hot from beyond the arc, having connected on 15 of 23-pointers in this series. That’s an off-the-charts 63 percent, easily the best percentage of any player in the playoffs who has attempted a minimum of 15 treys.

“He’s playing like an All-Star right now’’ said Bucks guard Malcolm Brogdon. “That’s the ultimate compliment I can give him. When Khris is shooting the ball like that, when he’s locked in on defense, he is one of the most complete players in the league.’’

And who would have ever thought that would be the case, especially when Middleton was in high school? While he was a standout player for Porter-Gaud High School in North Charleston, S.C., he didn’t receive much love on the national level.

While two of Middleton’s current Bucks teammates – John Henson and Eric Bledsoe – were projected as potential NBA players even then (Henson was ranked fifth by Recruiting Services Consensus Recruiting Index and Bledsoe was 52nd), Middleton was rated a lowly 99th.

While the recruiting services didn’t have much faith in Middleton’s pro potential, he believed in himself.

“That was the goal even then, to play in the NBA,’’ Middleton said. “I was going to take it step by step and see what happens. Those weren’t NBA scouts doing those rankings, so I didn’t pay attention to that.

“And my parents, my coaches used to always tell me not to worry about people who don’t know what they’re talking about.’’

That advice carried over when he attended Texas A&M, where the most points he ever averaged in his three seasons with the Aggies was a pedestrian 14.3. The cynics said he didn’t have what it takes to be an NBA player.

Middleton was taken by Detroit with the 39th overall pick in the 2012 draft and made the Pistons’ roster, but his future in basketball still remained murky. He appeared in only 27 games as a rookie for the Pistons and even had two stints with the Fort Wayne Mad Ants in then D-League.

In the summer of 2013, the Pistons gave up on Middleton, trading him to the Bucks along with Brandon Knight and Viacheslav Kravtsov for Brandon Jennings.

The Bucks coveted Knight, Kravtsov and Middleton not so much. The latter two players were included in the deal strictly for financial reasons to complete the transaction.

“I had to go out and fight for it.

The trade turned out to be a godsend for Middleton. He played all 82 games in his first season with the Bucks, starting 64 of them. He has remained in the starting lineup ever since.

This season Middleton started all 82 regular-season games, the only Bucks to do so. His 20.1 points per game output was a career high. So was his 5.2 rebound average.

Middleton’s sterling play didn’t unnoticed. He was chosen for USA Basketball’s 35 player team pool, with a chance to play in the 2020 Tokyo Olympics.

It was the latest example of how far Middleton has come in his six-year pro career.

Middleton won’t head to Las Vegas for the USA training camp until late July. Now he’s strictly focused on helping the Bucks beat the Celtics and advance to the second round of the playoffs for the first time since 2001 when George Karl was the head coach and Ray Allen, Glenn Robinson and Sam Cassell comprised the “Big Three.’’

It would be a drastic understatement to say Middleton has done more than his fair share so far in the playoffs. He is averaging 25.5 points and 5.5 rebounds in being the best player in the series.

Previous: Bucks Maker has been a difference-maker
Next: TODAY’S SPORTSTAT– Milwaukee hopes to buck the odds