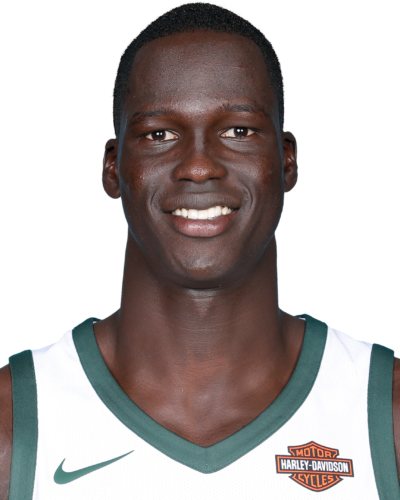 Home » Gery's Blog » Bucks Maker has been a difference-maker

MILWAUKEE – At one end of the Milwaukee Bucks’ locker room stood Giannis Antetokounmpo.

At the other end stood Thon Maker, the star of the Bucks 104-102 Game 4 playoff victory over the Boston Celtics on Sunday at the Bradley Center.

Antetokounmpo, with a IPhone in hand, tried to get Maker’s attention. “Thon,’’ Antetokounmpo yelled.

When he failed to get Maker’s attention, Antetokounmpo raised his voiced and yelled, “Thon.’’

This time, Maker heard him, He flashed a wide smile back at Antekounmpo, who then took a picture of the Bucks’ backup center, who was truly the center of attention. And rightfully so. If not for Maker’s key contributions, the Celtics could easily be heading back to Boston for Game 5 on Tuesday night with a 3-1 advantage in the best-of-seven game Eastern Conference series.

Maker, who averaged a modest 16 minutes a game during the regular season, was on the court for 31 minutes in Game 4, a total surpassed only by Antetokounmpo (40) and Khris Middleton (37) for the Bucks.

The 7-foot Maker deserved to be on the floor that long, too, because defensively he was a thorn in the side to Boston big man Al Horford and the rest of the Celtics.

Maker blocked five shots, which was two more than the entire Boston team accumulated on this occasion. He also had that many blocks in the Bucks’ Game 3 victory, which came on the heels of a pair of losses to the Celtics in Boston.

Maker, plain and simple, has been a difference-maker in this series.

“I think Thon’s mental toughness is underrated,’’ Bucks guard Malcolm Brogdon said. “When you talk about toughness and grit, Thon is the definition of that.

“He’s stayed locked in. He hasn’t played a lot this season, but he’s been able to come into the playoffs and play really well. There’s not many guys in the NBA who could have done that.’’

Indeed, Maker experienced a trying regular season. After enjoying a promising rookie season, which included being a starter in last season’s opening-round playoff series against Toronto, Maker lost his starting spot to John Henson this season.

It’s debatable if Maker even would have played any significant minutes in this series if Henson didn’t get hurt. The latter saw his back “lock up’’ in Game 2 and tried to play through the excruciating pain. But when the pain didn’t subside, he was forced to sit out Games 3 and 4. Bucks coach Joe Prunty then opted to start Tyler Zeller with Maker being his backup.

Maker, who averaged just 4.8 points and not even one blocked shot a game during the regular season, has taken full advantage of his playing time. He not only has been a tower of power on the defensive end, but has provided some unexpected scoring. In Game 3, he totaled 14 points and, in Game 4, he added eight points. He is five of nine on 3-pointers.

“He has been playing well,” Boston forward Marcus Morris said of Maker. “He’s really altering shots at the rim. He’s also been making the open 3-pointer.’’

Added Celtics shooting guard Jaylen Brown: “Maker came in and made a huge difference in this game.’’

And then there was this observation about Maker, courtesy of Bucks coach Joe Prunty: “Thon is playing extremely assertive. The blocked shots are going to stand out because it’s something that someone can see on a stat sheet. But he has a presence out there. They know where he is.’’

And because of that, the Bucks have Big Mo on their side in what essentially is now a best-of-three series.

The Bucks bench brigade answered the call in a big way in Game 4.

Not only did Maker play well, but the Bucks three other reserves registered quality showings.

In the plus-minus category, the Bucks four reserves were a combined plus 37. In contrast, Boston’s bench was a combined minus 30.

Celtics starting point guard Terry Rozier was fabulous in Boston’s two victories but has struggled in the Celtics’ two losses.  He had nine points on two for seven shooting, along with five turnovers, in Game 3, and was 3 of 12, including 2 of 10 on treys, in Game 4. … Henson was noticeably limping on Sunday afternoon and it’s unlikely he’ll play on Tuesday night. … The Celtics had 16 offensive rebounds; the Bucks had only two, both by Antetokounmpo. … Middleton on Parker: “We’ve been saying from the beginning that we need him. He is one of the best scorers in the league and one of the best players. ‘’

Previous: Prunty brings his ‘A’ game to Game 3
Next: Middleton flashes ‘star’ power