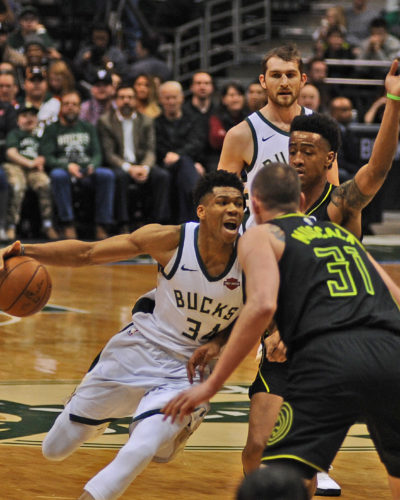 There is a perception the Milwaukee Bucks have been classic underachievers this season.

The perception is the Bucks have a collection of quality players and should be certifiable Eastern Conference championship contender.

That isn’t the perception of six NBA officials, though. The two advance scouts, two player personnel directors and two executives who were recently asked to rate each Bucks player on a 1 to 10 scale, with 10 being a guaranteed hall of fame player.

Based on their ratings, the Bucks, who are in the eighth and final playoff spot in the Eastern Conference standings with a 37-33 record, have slightly above talent, with only one prime-time player – Giannis Antetokoumpo – and two above average players in Jabari Parker and Khris Middleton.

Said an Eastern Conference scout about Antetokounmpo, who was easily rated the Bucks’ best player: “Giannis is absolutely phenomenal. I don’t know how much more he could possibly do for that team.’’

Said an Eastern Conference executive on Parker, the second-highest rated Buck: “He’s back, no question about it. Healthy, he’s a hell of a player. I don’t know if he’ll get the max contract this summer (as a restricted free agent), but it wouldn’t surprise me at all if he did.’’

Middleton, who received third highest score, is “is a good player but not a great player in my mind,’’ a Western Conference advance scout said. “He’s a good mid-range shooter and has been a good 3-point shooter, although he isn’t this season. And he doesn’t create much and he’s an average athlete. I’d think he’d be a nice fourth starter on a real good team.’’

Asked to assess the Bucks’ overall talent, a scout said: “If you’re asking me if their talent level is overrated, I would have to answer yes. They have Giannis, but then you have to wonder about Jabari’s health and Khris’ health. I’m not sure Middleton is the same player he was before that (when he completely tore a hamstring in a pickup game in September of 2016) injury. After those guys, you have a lot of mediocrity, if that.’’

Below is the grading scale and the grades given to each Bucks player by the aforementioned NBA officials:

1 — No business being in league

Brandon Jennings and Shabazz Muhammad weren’t rated because of the few games he’s played with the Bucks.