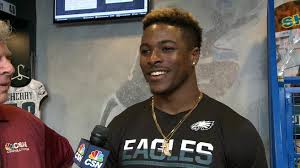 BY JERRY TAPP
Former Wisconsin Badgers running back Corey Clement went from being undrafted in 2017 to being a major player for the Philadelphia Eagles. Clement had four catches for 100 yards and scored a TD for the Eagles in their 41-33 Super Bowl win over New England.

Previous: NBA trade winds starting to intensify
Next: TODAY’S SPORTSTAT-Wilt was the chairman of the boards