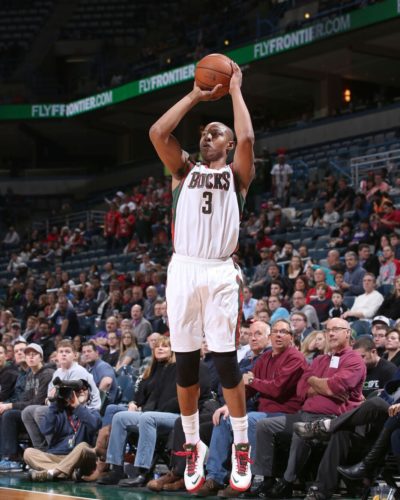 The numbers tell a lot but hardly everything about Caron Butler’s NBA career.

In 14 seasons as a pro, Butler fashioned some impressive numbers, ones that vividly illustrate he just wasn’t your run-of-the-mill player. To consider this: He played in 881 games and started in 732 of them and he recorded four seasons in which he averaged more than 16 points per game, including two seasons of more than 20 points.

But scoring was just one aspect of Butler’s game. He boasted a complete game: he was a good rebounder, a good passer and good defender. In two seasons, he ranked among the top nine in steals.

Indeed, while Butler, who formally announced his retirement last week, wasn’t a scoring or rebounding machine, he did a lot of things well. That’s why, despite not having gaudy numbers, he was twice chosen to the NBA All-Star Game and why he was constantly given major minutes by his coaches, all who fully realized Butler could help their teams in a variety of ways.

In three seasons, Butler ranked among the league’s top 10 leaders in minutes per game. During the 2007-2008 season, he ranked as high as fourth at 39.9 minutes. That average would, easily, lead the NBA this season.

Talk to anyone who coached Butler or played with him during his NBA career and they’ll inevitably bring up the intangibles he brought to a team, intangibles that can’t be calculated, intangibles that the general public can’t statistically wrap themselves around.

Like leadership and commitment to his team and to the community the team was in. Eric Bledsoe can attest to that. In 2011, with Bledsoe entering his second NBA season with the Los Angeles Clippers, Butler took him under his wing.

“He told me one of the things you have to do as an NBA player is look presentable, so he got me that suit. It was a beautiful suit, too. Caron just taught me to be professional on and off the court.’’

Bledsoe, now the starting point guard for the Milwaukee Bucks, said Butler helped him more than just being nattily attired. Bledsoe said Butler kept him grounded and lifted him up when he was down.

“When I wasn’t playing, Caron was telling me to be patient,’’ Bledsoe said. “He would tell me my time would come. As a young player, it’s great to have someone like Caron. Caron was always there for me.’’

Those words hit home with Kevin Durant as well. Durant, arguably the best player on the planet, was a teammate of Butler’s while playing for the Oklahoma City Thunder during the 2013-2014 season.

Durant said he and Butler hit it off right away and have remained extremely close since. Durant, like Bledsoe, said Butler frequently conversed with him about basketball and life.

“Caron taught me a lot about the NBA, a lot about being professional,’’ Durant said. “And his work ethic was contagious. I remember when we went to another city, he would go with me to work out or shoot around, little stuff like that, and that meant a lot to me as a player and as a person.’’

Durant said Butler was the consummate teammate, always having his back.

“He would leave me notes in my locker, just words of encouragement, always trying to uplift me after a tough game,’’ Durant said. “He was always very good to me and wanted to be like a mentor for me.

“He had a great career, an illustrious career, and I’m very proud to spend time with him.’’

Miami Heat coach Erik Spoelstra first encountered Butler back in 2002 when the former was an assistant coach and Butler was the team’s first-round draft pick, the 10th overall selection. Spoelstra said Butler made an immediate, profound impression on him.

“We love Caron,’’ Spoelstra said. “He only played two years for us, but it felt like and still feels like he’s been a member of our family for life. There are some players who you have that connection with and Caron was one of them.

“He made that type of impression on each one of us in those two years. We’ve all kept in touch and, when he went on to play with different teams, we still always looked at him as part of the Heat operation.’’

Spoelstra said one of Butler’s endearing qualities is his caring. Spoelstra said Butler constantly went out of the way to lend a hand, especially those who were going through trying times in their lives. Said Spoestra: “Caron is the type of guy who would give the shirt off his back to you.’’

Spoelstra said he’s admired how Butler overcame troubles with the law as a youth while growing up in Racine, Wisconsin and transforming his life into a productive one.

Spoelstra said he appreciated how Butler chronicled his rough upbringing in his best-selling book “Tuff Juice: My Journey from the Streets to the NBA’’ and is looking forward to seeing the movie adaptation.

“Caron has an incredible story,’’ Spoelstra said. “That’s why I love the fact he had a book and there’s a movie being made about how he was brought up and how many things he had to overcome to end up where he is.

“To show that kind of character and perseverance and be that kind of a person is an outstanding example for kids coming up. I think what he’s done is awesome and that was more impactful than anything he’s done in this league, which was great stuff.’’