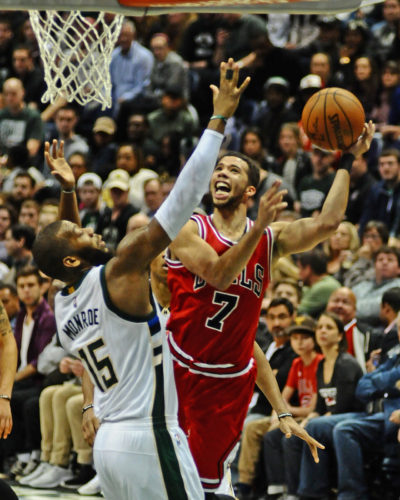 LAS VEGAS – Greg Monroe is delighted to be back with the Milwaukee Bucks.

Monroe had the opportunity to opt out of his contract at the start of the month but opted to remain with the Bucks and collect $17.8 million for the remaining year on his contract.

“I’m happy,’’ said Monroe, who attended the Bucks-Jazz game Friday night at Cox Pavilion on the UNLV campus. “I had no reason to leave. I want to build on what we started last year.’’

Monroe is spending several days in Vegas, working out with Bucks assistant coach Greg Foster and Tim Grgurich. Monroe looks slim and trim and is in perhaps the best shape of his pro career.

While Monroe was in an upbeat mood on Friday and seemed genuinely pleased to be back with the Bucks, he knows he is still the subject of considerable trade conjecture.

“I’d like to stay but that’s up to them,’’ said Monroe, referring to the Bucks’ front office.

Jason Terry also made an appearance at the Summer League and, while it is generally assumed he’ll return to the Bucks for another season, it’s far from a slam dunk.

According to league sources, the 39-year-old Terry, who gave the Bucks some quality leadership and 3-point shooting last season, has drawn interest from some other teams.

An official with a Western Conference playoff-caliber team, who requested anonymity, confirmed his team is contemplating extending Terry a contract offer.

Add Mark Hughes to the list of candidates for the Bucks’ vacant assistant general manager’s position.

Hughes has been the director of player personnel for the New York Knicks since 2011. Prior to that, he had assistant coaching stints with Orlando and Sacramento.

The Bucks, with the 17th overall selection in the June draft, took Michigan forward D.J. Wilson, who acquitted himself nicely in summer league competition.

However, there were many NBA officials who thought the Bucks should have taken UCLA forward T.J. Leaf, who was taken at 18 by Indiana, or Wake Forest forward John Collins, who was taken 19 by Atlanta.

“We liked Wilson, too, so I think that was a good pick also.’’

Gary Payton II has a non-guaranteed contract for $1.3 million next season and has to be on the opening game roster to collect it. … Bucks assistant coach Eric Hughes had a legitimate reason for not attending the Summer League: His wife, Kristin, earlier this week gave birth to a son.

Previous: Newton on Bucks’ radar for Asst. GM position
Next: Tapp-ing into the Numbers: Stats you may not know about the 1982 Milwaukee Brewers