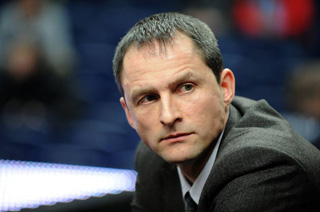 The Milwaukee Bucks’ search for a new general manager will go to a whole new level starting on Monday.

A league source said Denver Nuggets assistant general manager Arturas Karnisovas will be one of the first, if not the first, candidate to partake in the interview process.

A native of Lithuania, the 46-year-old Karnisovas has been employed by the Nuggets since 2013 and has served as Nuggets GM Tim Connelly’s right-hand man.

Karnisovas played a major role in the Nuggets drafting Nikola Jokic with the 41st overall selection in the 2014 NBA draft. Jokic is now one of the league’s rising stars. Prior to joining the Nuggets, Karnisovas was an international scout for five years with the Houston Rockets.

The 6-foot-6 Karnisovas played collegiately at Seton Hall from 1990—1994 before having a nice pro career in Europe. He was also a member of Lithuania’s 1992 Olympics bronze-medal winning team that also included stars Arvydas Sabonis and Sarunas Marciulionis.

“I was very impressed by him when we worked together,’’ said a former colleagues of Karnisovas. “He was well-organized, conscientious, knew a lot of basketball people here and overseas. A good basketball guy, a good guy overall.’’

The Bucks aren’t expected to conduct any major pre-draft workouts until the middle of the month.

However, they figure to be sending a couple of individuals to the adidas EUROCAMP this week in Treviso, Italy. The camp, which features the premier international talent, will run from Friday through Sunday.

Bucks player personnel director Dave Babcock is expected to attend the event as he has done on numerous occasions. Bucks assistant coach Eric Hughes is also expected to be part of the EUROCAMP coaching staff.

One Bucks player who participated in the camp is Thon Maker, a native of South Sudan who was the Bucks’ first-round draft selection last summer.

Previous: Tapp-ing into the Numbers: Some stats from Game 1 of NBA Finals
Next: Bucks owners have their own opinion on next GM