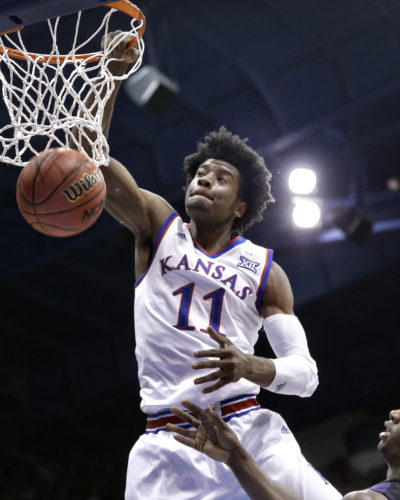 When NBA officials claim the June draft will be one of the deepest ever, they aren’t lying.

In a recent random poll of five veteran NBA scouts and front office executives, no less than 21 players received at least one vote for being a potential lottery pick – or a top 14 selection.

“This draft is so much better than last year’s draft,’’ a longtime Eastern Conference player personnel director said. “There are a lot of good to very good players, one of the best we’ve had.’’

The only perceived negative to the 2017 draft class is the lack of a franchise-changing player. You won’t find any players the ilk of LeBron James in this cast.

Yet, NBA personnel are enamored with the fact that you don’t have to have a top three pick to come away with a potential star.

In fact, the prevailing opinion is that nine players could be impactful players in their first pro season. That elite list includes a slew of blue-chip point guards: Markelle Fultz of Washington, Lonzo Ball of UCLA, De’Aaron Fox of Kentucky and Dennis Smith of North Carolina State.

And, who is the best of the best?

That would be Ball, who collected 65 points in the voting, which awarded 14 points to a player who was ranked first on each NBA official’s list  to one point for the player who is ranked 14h-on their list.

“Ball has the complete offensive package,’’ an Eastern Conference scout said. “What I really like is that he can get his shot whenever he wants.’’

Added a Western Conference scout on Ball: “Nobody in this draft can change a game like him.’’

A longtimeNBA official, who has been heavily involved in the draft process for nearly two decades, said he chose Fultz for one reason: “He’s the best all-around player in the draft. He can do everything pretty well. I’ve always had him as the No. 1 guy in this draft. ’’

Two individuals who were polled, though, didn’t agree and didn’t even have Ball as one of their top two choices. One ranked Fultz third on his board, while another had Fultz fifth on his board.

Interestingly, the other remaining first-place vote went to Jackson. The NBA official who had Jackson first on his list conceded Fultz and Ball are better players now but contended Jackson’s long-range potential is better.

Jackson finished with 57 points in the voting, or just one point ahead of the fourth-place finisher Tatum.

While Smith was generally regarded as the seventh or eighth-best draft prospect by those polled, one personnel official rated him third, ahead of Fultz.

Smith, an explosive scorer, averaged 18.1 points per game for the Wolfpack this season. Of the top-nine ranked players in this survey, only Fultz (23.2 points) and Monk (19.8 points) averaged more points than Smith.

Markkanen, who is the prototypical “stretch four’’ with his exceptional shooting range, wound up ninth poll with 30 points.

There was then a distinct dropoff with the next highest vote-getter being Gonzaga freshman forward Zach Collins.

“This is where the draft gets interesting,’’ an NBA executive said. “Those nine guys are pretty much locked in. After him (Markkanen), there’s a lot of guys who could sneak into the tailend of the lottery.’’

Indeed, here is the voting results of the five officials and they ranked the 21 players who garnered at least one lottery vote:

Some other draft tidbits gleaned from the poll: