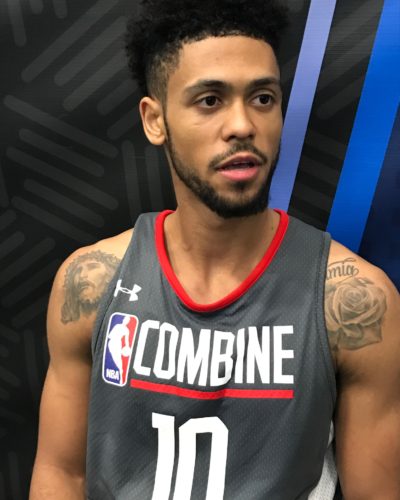 Query any player at the pre-draft camp in Chicago and they’d all say they would be delighted to play for any of the NBA’s 30 teams.

Tyler Dorsey, the sharp-shooting guard from the University of Oregon, isn’t an exception. He’s decided to leave college after two years and is more than willing to relocate to any city that has an NBA franchise.

Yet, if Dorsey had his druthers, there’d probably be one team near the top, if not at the top, of his list of favorite NBA teams to be on next season. And that would be the Milwaukee Bucks.

Dorsey believes Milwaukee would be the perfect place for him, especially since he already has a strong rapport Bucks’ All-Star Giannis Antetokounmpo.

What’s more, Dorsey possesses a skill-set the Bucks are coveting: a combination guard who he can flat out shoot the 3-ball.

As for the former, Dorsey forged a friendship with Antetokounmpo last summer when they were both competing with the Greece national team in Athens.

Dorsey, who has an outgoing personality similar to Antetokounmpo’s, spent two weeks with the Bucks star and his brother, Thanasis.

“I had a chance to get some shots up with the Greek Freak and his brother after practice a couple of times and hung out with them,’’ said Dorsey, whom the Bucks interviewed at the pre-draft camp and are expected to work out Monday at their training facility in St. Francis. “He’s a good dude, a genuine, good dude.

“It was fun to hang around him and get to know him. He’s a family man, and he’s really close to his brothers.’’

Dorsey wasn’t only impressed with Antetokounmpo’s pleasant, easy-going persona, but also his hard-driving passion to become a special player.

Dorsey said he watched Antetokounmpo work non-stop, trying to improve on every aspect of his game. Suffice to say, it left a marked impression on Dorsey.

“I saw his work ethic in the summer and it was unbelievable,’’ Dorsey said. “So I wasn’t surprised he was an All-Star this season because I saw how hard he worked every day.’’

Dorsey has an admirable work ethic, too. He is constantly honing his game, particularly with his shooting, and that paid off in a big way late last season.

That’s when the 6-foot-4 Dorsey strung together a series of exceptional games against some of the best teams in the land. In the Ducks’ last eight games, he scored at least 20 points in every one of them. That included a 20-point game against Michigan in the Sweet 16, where he also hit the game-winning shot, a 27 point outing against Kansas in the Elite Eight and a 21-point showing against North Carolina in the national semifinal game

In that three-game stretch, he was nothing short of deadly from beyond the arc as he converted on 14 of 24 treys.

“I definitely think shooting is my strength,’’ said Dorsey, a business major who is just one year away from his degree. ”I can shoot the ball off the dribble or catch and shoot it.’’

And he has no doubt that he’ll adjust to the longer 3-point shot in the NBA.

“I’m used to shooting that deep, from that range.’’ Dorsey said. “I worked on it in college. I think it’ll be an easy transition for me.’’

And he thinks the transition would be even easier playing alongside his friend, Antetokounmpo.

“People who guard him are engaged in him and focus on him a lot and he gets to the rim really well,’’ Dorsey said of Antetokounmpo. “So, if a defender leaks off of you to help guard him, he’s going to find you as well and get a good look. He’s a great facilitator. He’d be a great dude to play with.’’