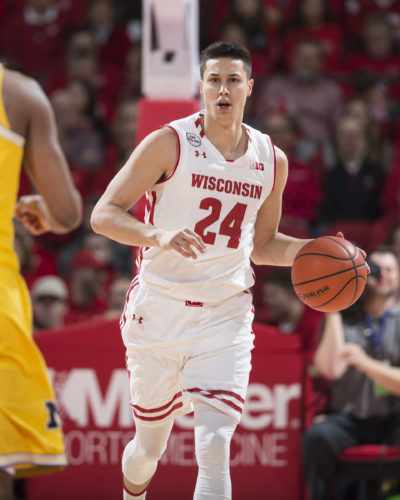 We all know Bronson Koenig can score.

At the University of Wisconsin last season, Koenig averaged 14.5 points, tops on a well-balanced and talented team. In his four seasons with the Badgers, he accumulated 1,459 points, the ninth most in the history of the program.

We also know that Koenig can shoot the ball, especially from long range. He connected on a school record 103 treys last season and finished with his stellar career with a school record 270 baskets from beyond the arc. He made at least one 3-pointer in 43 consecutive games and made eight – repeat, eight – in Wisconsin’s opening-round victory over Virginia Tech in last season’ s NCAA Tournament.

But what most of us don’t know about the 6-foot-3 Koenig is that the best aspect of his game isn’t scoring or shooting; it’s his passing.

So says Matt Ryan, who was once on the coaching staff at Wisconsin and is now a personal trainer in Los Angeles. Ryan, the son of former Badgers coach Bo Ryan, said he saw what an exceptional passer Koenig was when the latter was in high school in La Crosse, Wis.

“I first saw Bronson when he was 15 and he was at Wisconsin’s advanced camp in Madison,’’ Ryan said Wednesday in a telephone interview from Los Angeles. “He made this incredible full-court pass; it was right on the dime.

“I turned to Gardo (Wisconsin’s current head coach Greg Gard) and said, ‘Did you see that pass? Tell me, we’re signing that kid.’ And then Gardo said we were signing him and that he was a special player. And he is.

“I have Ioved that kid since that first pass. I think his passing is the best part of his game.’’

While Koenig didn’t have many opportunities to exhibit his passing skills for the Badgers in their so-called “Swing’’ offense, he’s hoping to demonstrate that underappreciated facet of his game to NBA officials during the next several weeks. He has workouts scheduled with a slew of teams, starting with the Milwaukee Bucks on Thursday at the team’s practice facility in St. Francis.

Koenig, in an interview from Madison on Wednesday, said he concurred with Ryan that his passing prowess is the best part of his game.

“I really love passing,’’ Koenig said. “I wasn’t able to show my passing skills as much as l would have liked in college. But in high school (at La Crosse Aquinas), I had a reputation of being a passer, of being the best passer in the state.

“I still have that part of my game in me and I want to show them (NBA personnel) that.’’

Koenig said he’s always derived more satisfaction out of making a great pass than scoring a basket and that’s why he’s watched countless videos of the game’s legendary passers and playmakers.

“I’ve watched film of Jason Kidd,’’ Koenig said of the Bucks current head coach. “And I watched Pete Maravich from when he played way back in the day and Steve Nash.

Koenig had hoped to flash his passing skills for NBA officials at the Portsmouth Invitational Tournament last month in Portsmouth, Va. The longtime tournament for seniors only has been a steppingstone to the NBA for many players, including former Marquette University stars Jimmy Butler of the Chicago Bulls and Wesley Matthews of the Dallas Mavericks and Steve Novak and Wisconsin’s Jon Leuer, who is now with the Detroit Pistons.

But after testing well —  he had one of the quickest lane agility times of the 60-plus players in attendance and a no-step vertical jump of 31 1/2 — and after a solid first game, Koenig hurt his ankle on the second possession of the second game and sat out the rest of the tournament. He’s been on the comeback trail ever since and didn’t feel he was fully recovered until a couple of days ago when he played an informal game.

To say he’s psyched up about exhibiting his skills for Bucks officials would be understating the case.

“I’ve been a Bucks fan my whole life,’’ said Koenig, who earned his degree in life sciences communication last weekend. “I’ve always been a Wisconsin guy in all sports. So, to have my first workout with the Bucks makes me excited and a little nervous. I’m looking forward to showing them what I can do.’’

Koenig is convinced he’s capable of playing in the NBA and will try to convince not only the Bucks but other teams of that during upcoming workouts.

Koenig said Keith Kreiter, his Chicago-based agent, who has represented several other Badgers in the past, including Brian Butch and Marcus Landry, has lined up workouts with the Houston Rockets on Monday and Detroit Pistons on Tuesday. He’ll also audition for the Dallas Mavericks, Phoenix Suns, Los Angeles Clippers and Los Angeles Lakers.

Koenig hopes teams will not only take into account his basketball skills and acumen, but the winning resume he has compiled. After leading La Crosse Aquinas to two state high school championships, Koenig played an integral role in Wisconsin advancing to four straight Sweet 16s and two Final Four appearances.

“I have a lot of confidence in myself,’’ Koenig said. “I definitely believe I not only can play in the NBA but I can help a team win. Ultimately, it’s all about winning and I’ve done that my whole life.’’

Previous: Dorsey Wants To Be Greek Freak’s Teammate Again
Next: Tapp-ing Into The Numbers: Scoring 40 Points In An NBA Playoff Game