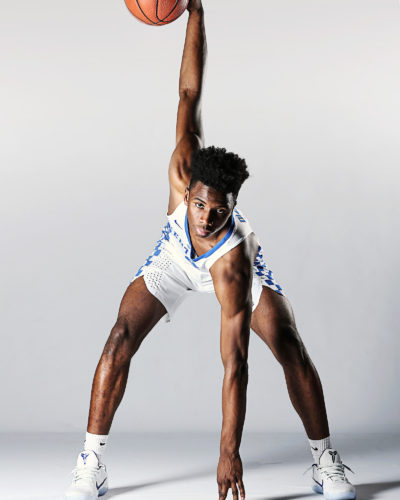 Home » Gery's Blog » Diallo has the look of a future Buck

If you’ve followed John Hammond’s career as the general manager of the Milwaukee Bucks, you know he’s infatuated with players who have an “upside’’ to their game.

Hammond’s very first pick as the Bucks’ GM in 2008 vividly illustrated his approach to the draft. That’s when, with the eighth overall pick, he drafted Joe Alexander, a forward from West Virginia whose athleticism was off-the charts.

But Alexander never grasped the pro game and,  after playing 59 games with the Bucks, he was dealt to Chicago, where he played in just eight games. It was the extent of his NBA career.

Since that ill-fated decision to draft Alexander, Hammond has had his share of hits and misses while consistently selecting players with “upsides’’, be it Brandon Jennings or Larry Sanders or Giannis Antetokounmpo or Rashad Vaughn or Thon Maker.

In light of Hammond’s penchant to swing for the fences, some NBA observers are already speculating he’ll again select another young, unproven player who could be a boom or bust pick.

One draft prospect who fits into that mold and is being linked to the Bucks is Terrance Ferguson, a highly athletic 6-foot-7 wing who opted to play for the Adelaide 36ers in Australia last season instead of collegiately in the states.

According to a highly-respected NBA official, Ferguson, who just turned 19 last week, could be drafted anywhere between 15 to 25.

The other draft prospect who fits Hammond’s draft profile is Hamidou Diallo who, again, is exceptionally athletic. Diallo, who doesn’t turn 19 until July 31, had enrolled at Kentucky last season but never played for the Wildcats.

The 6-6 Diallo caught the attention of NBA officials in a big way at the recent pre-draft camp in Chicago when he recorded an incredible 44½ max vertical leap. The next highest-flyer at the camp was Frank Mason III of Kansas, who went “just’’ 41.

Diallo also measured at 6-3¾ without shoes but had an eye-popping 6-11 wingspan, yet another measurable Hammond and Co. look at closely. Throw in Diallo’s three-quarter sprint time of 3.11 seconds and you have perhaps the most athletic player in the draft.

That is, of course, if Diallo decides to remain in the draft. The scuttlebutt is he is still considering going back to Kentucky. League sources have told me that Diallo will stay in the draft only if he receives a “guarantee’’ from a team that it will select him in the first round.

Some NBA officials claim they wouldn’t do that. Said a longtime Western Conference scout of Diallo: “He’s very athletic and long. But he has no game. None. I see him as a second-round pick. I hope, for his sake, he goes back to college.’’

Yet, there was that same type of “He’s too young and not ready for the NBA’’ sentiment before the draft surrounding Antetokounmpo, who played against low-level competition in Greece before being chosen by the Bucks with the 15th overall pick in the 2013 draft, and with Maker who had played in relative anonymity in Australia and whom many teams regarded as a mid-to-late first-round selection before Hammond surprisingly tabbed him with the 10th overall pick.

The Bucks obviously are intrigued by Diallo or they wouldn’t have worked him out recently. Two individuals familiar with the workout agreed Diallo was clearly rough around the edges but clearly a superior athlete.

They also concurred it wouldn’t shock them one bit if they took Diallo with their first pick in the June 22 draft..

While the Bucks aren’t scheduled to conduct any workouts on Wednesday at the team’s training facility in St. Francis, some teams officials are expected to attend a pro-day for Texas center Jarrett Allen and North Carolina forward Justin Jackson in Washington. Allen and Jackson are both projected to be mid first-round picks.

Former University of Wisconsin standout guard Bronson Koenig was forced to miss workouts with Detroit and Houston this week after tweaking his ankle during a workout for the Bucks.

However, Koenig figures to be ready to resume working out soon and has already rescheduled a workout with the Houston Rockets. The Rockets’ scouting department is quite familiar with Koenig after having drafted Koenig’s former Badger teammate Sam Dekker two years ago.

Photo of Hamidou Diallo is courtesy of University of Kentucky athletics

Previous: Three potential Brewers draft picks
Next: Tapp-ing into the Numbers: Batters with 120+ strikeouts and walks in a season