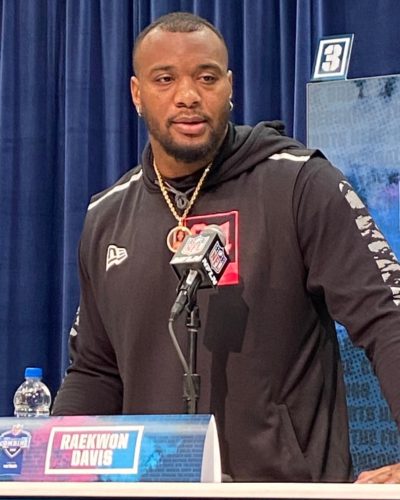 Home » Gery's Blog » Would Packers be willing to roll the dice on Raekwon Davis?

INDIANAPOLIS — Raekwon Davis wouldn’t have any objections being selected by the Green Bay Packers in the upcoming NFL draft.

Davis is well aware of the Packers’ rich tradition and their fan base that’s second to none in sports. He also knows the Packers advanced to the NFC championship game last season and have a hall of fame in-waiting quarterback in Aaron Rodgers.

From a football standpoint, it doesn’t get much better.

But Davis could find becoming a Packer appealing on another front.

“I love to deer hunt,’’ the massive defensive lineman from the University of Alabama said while being interviewed at the NFL Combine in Indianapolis. “And I love fishing.’’

He then pauses before adding, “I’m a country guy.’’

Indeed, Davis relishes being outdoors to take his mind off football. His prize catch was a 16-pound catfish. He has bagged a 12-point deer with a rifle.

But Davis’ fishing and hunting prowess don’t mean much to the NFL teams that are trying to bolster their defensive line. The numbers they are concerned about are tackles and sacks.

During his four-year career with the Crimson Tide, Davis posted some gaudy ones and some puzzling ones. In his sophomore season, he was simply sensational: He registered 69 tackles and 8.5 sacks.

But then Davis’ numbers started to decline. In his junior season, he had 55 tackles and 1.5 sack. And, as a senior last season, he managed 47 tackles and a mere half sack.

A veteran NFL scout claims a major reason was “He didn’t have Quinn Williams next to him.’’ True. Williams was a force and eventually was chosen as the third overall player in the 2019 draft by the New York Jets.

But Williams had another explanation for his mysterious drop off in production.

“There were a lot of things I wasn’t doing just to improve my game,’’ Davis said. “I wasn’t really focused enough sometimes and there was just a lot of stuff I wasn’t doing.

While Davis’ decline in play is obviously a concern to NFL officials, they also recognize Williams has the potential to be a big-time player. Teams like the reigning Super Bowl champion Kansas City Chiefs and perennial power New England Patriots didn’t have formal interviews with him for nothing.

To them, Davis’ physical attributes are too good to ignore. He’s a chiseled 6-foot-7. 311-pounder who possesses a wingspan of a condor at 7 feet. 1 inch. His’ combination of length and strength makes running his way difficult. It also allows him to play tackle or end.

“I’m comfortable playing anywhere on the line,’’ said Davis, who earned a degree in exercise science at Alabama.

So, where will Davis wind up being drafted?

Former Washington and Houston general manager Charley Casserly, in a recent mock draft for NFL.com, has Davis being selected by the Packers, who have the 30th overall pick.

It clearly does. But would the Packers, or any team, invest a precious first-round pick on a player whose productivity noticeably slipped the last two seasons?

He then added, “Davis has been a big underachiever, but there’s no denying his talent.’’

Previous: Packers could receive nice present in the draft
Next: Some NFL teams prefer passing on QBs in the first round