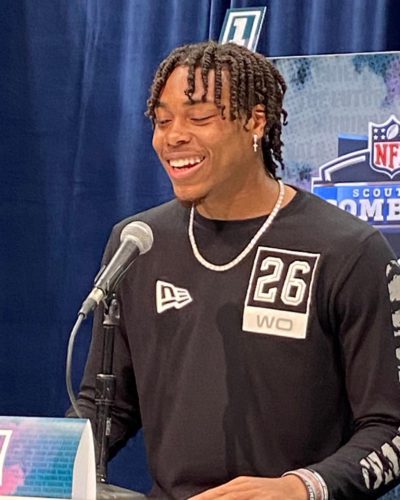 INDIANAPOLIS — Expending a high draft pick on a receiver hasn’t exactly been a priority for the Green Bay Packers.

In each of the last 14 drafts, the Packers passed on selecting a receiver with their first-round pick. You have to go all the way back to 2006 when they chose one, that being Javon Walker.

The Packers haven’t used many second-round picks on receivers either, although when they did the decision more often than not proved to be shrewd.

The Packers took Davante Adams in the second round in 2014, after taking Randall Cobb (2011), Jordy Nelson (2008) and Greg Jennings (2006) as second rounders. All enjoyed stellar careers in Green Bay.

While the Packers have drafted just five receivers in the first two rounds in the last 14 years – and none since Adams six drafts ago – there is considerable speculation the Packers will use one of their top picks on one in this year’s draft.

That’s because this draft class is saturated with tantalizing receivers.

Indeed, it is. To wit: In last year’s draft, just two receivers had their name called in the first round. It was the same number two years ago, and one fewer than the 2017 draft. In other words, a mere seven receivers went in the first round in the last three drafts.

According to some NFL officials attending the Combine, there are seven legitimate receivers who could go in the first round. They are CeeDee Lamb of Oklahoma, Jerry Jeudy of Alabama, Henry Ruggs III of Alabama, Tee Higgins of Clemson, Laviska Shenault of Colorado, Justin Jefferson of Louisiana State (pictured above) and Jalen Reagor of Texas Christian University.

The NFL hasn’t had this many big-time receiver prospects since 2014 when Odell Beckham Jr., Sammy Watkins, Mike Evans, Brandin Cooks and Kelvin Benjamin were first-round selections.

“I think we check a lot of boxes,’’ Shenault said of the 2020 receivers draft class. “I think this class is going to do great things. It’s definitely going to be a legendary class.’’

As impressive as the aforementioned group of receivers is, there are a spate of other receivers who, in a few years, could make their mark. Brandon Aiyuk of Arizona State, K.J. Hamler of Penn State, Gabriel Davis of Central Florida, Lynn Bowden of Kentucky, Antonio Gandy-Golden o Liberty, K.J. Hill could be taken in the second round and have the potential to develop into top-notch receivers.

And there’s even more intriguing receivers after that.

“It’s really an interesting group to pull in a guy who has potential and continue to help him grow. There’s going to be some guys in that group that I believe will be really interesting football players and starters in this league.’’

But for the Packers, it’s not about the future. If they draft a receiver in round one or two, they’ll want that receiver to make an immediate impact.

They’ll want a receiver to alleviate the burden on Adams and, of course, give Aaron Rodgers another viable passing option. A blazer, a deep threat receiver like Ruggs III or Reagor – who have been clocked at 4.25 and 4.29, respectively, in the 40-yard dash – would open up an already explosive offense even more

Shenault, an amazing athlete who can play in the slot or outside and can be a running threat, candidly acknowledged he wouldn’t mind donning a Packers hat when the draft is held on April 23-25 in Las Vegas.

“Rodgers is great,’’ said Shenault, who was interviewed by the Packers at the Combine. “Who wouldn’t want to play with Rodgers? … along with Adams, a great receiver. I’d love to learn from him.’’

Previous: Badgers hope NFL Combine is springboard to enhancing draft status
Next: Would Packers be willing to roll the dice on Raekwon Davis?