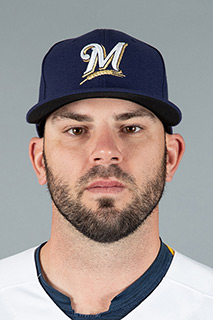 Mike Moustakas was the hero in the Brewers’ 7-5 win over the Miami Marlins on September 11. He hit a pair of two-run home runs in the contest. What made it all the more celebratory for “Moose” was that the two long balls came on his 31st birthday.

Three of the 43 players in this group have hit two or more homers in a game on their birthday twice in their careers: Duke Snider, Justin Morneau and Kirk Gibson each hit a pair of home runs on their birthdays in two different seasons.

Nomar Garciaparra holds the MLB record for most home runs in a game on a birthday with three. He did that on July 23, 2002 as a member of the Boston Red Sox. Garciaparra had three home runs and eight RBI in Game Two of a doubleheader against Tampa Bay on his 29th birthday.

Previous: Packers-Bears game by the numbers
Next: Zielinski: Packers will prevail in a thriller vs. Vikings