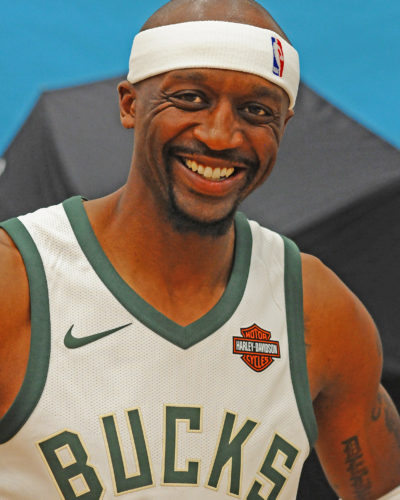 Home » Uncategorized » ‘The Jet’ plans to keep flying for another season

Rashad Vaughn was blown away.

When he was told his Milwaukee Bucks teammate Jason Terry was 40-years old and has no immediate intention of giving up his daytime job after this season, Vaughn shook his head in disbelief, trying to put it all in perspective.

Indeed. Terry played his first NBA game on Nov. 2, 1999 – when Vaughn was a mere two-years old. Now in his 19th pro season, Terry, aka The Jet, makes it abundantly clear there’s still fuel left in his tank and that he fully intends on playing next season as well.

“I’m a very goal-oriented guy and I’m going to make sure that happens.’’

If Terry attains his goal and plays two decades in the NBA, he would join a select number of players to have accomplished the remarkable longevity feat.

In fact, only seven players in the history of the NBA have played 20 or more seasons. Robert Parish, Kevin Willis and Kevin Garnett each played 21 seasons, while Kareem Abdul-Jabbar, Kobe Bryant, Vince Carter and Dirk Nowitzki (the latter two are still playing) have 20 seasons on their resumes.

While Vaughn and many others have difficulty fathoming the fact Terry has been playing for pay since Bill Clinton was occupying the Oval Office, Terry insists he isn’t.

Terry claims he envisioned playing 20 years early in his career when he saw how some other players he respected didn’t prematurely hang up the sneakers.

Kidd, who is now Terry’s coach and who is just four years older than him, played 19 seasons; Payton played 18 seasons.

Listening to some of Terry’s teammates, they wouldn’t mind having Terry be their teammates for years to come. They claim Terry remains a solid contributor and hasn’t let Father Time render him a mere cheerleader.

“When he plays, he’s still keeps up with the guys at his position,’’ Bucks center Thon Maker said.

Added center John Henson: “He can still play. He can move; he can guard, he can shoot it. To be honest with you, I don’t see much of a drop-off in his game unless you look back to his Atlanta Hawks days.

“For the most part, he’s an effective player when he’s out there on the court. It speaks to his drive, to his work ethic and his knowledge of the game that he’s still effective at 40 years old.’’

While Terry plays mostly spot minutes now, and realizes his prime-time years – when he averaged 19 points a game, on three occasions, no less — are clearly in his rear view mirror, Terry is constantly dispensing his hoops wisdom on his teammates, especially the young ones.

Maker, who is just 20 and in his second pro season, has frequently sat next to Terry on the Bucks’ bench during games and picked his brain.

“Jet is like one of the coaching staff members,’’ Maker said. “He’s a true professional in terms of letting us young guys know what we need to do to continue playing in this league. He’ll talk to us whenever we need help.

“Personally, if there was a play I was unsure of or if I had some questions, he would answer them.’’

Vaughn, who has experienced his share of trials and tribulations since being the Bucks’ No. 1 pick in the 2015, said he’s grateful to Terry for always being willing to lend a helping hand.

Previous: TODAY’S SPORTSTAT–10 players have had 50-point plus games against the Bucks
Next: Bogut shows up on Bucks’ radar screen