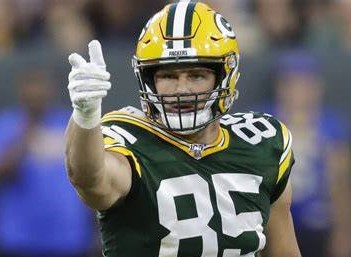 Home » Gery's Blog » Tonyan could be at a crossroad with Packers

Take a gander around the NFL and you’ll discover that several of the elite team have an elite tight end.

And the Baltimore Ravens have Mark Andrews.

All of the aforementioned tight ends are difference-makers, ones who can tilt the field in favor of their respective teams.

The Green Bay Packers seemed on the brink of having their own impactful tight end three seasons ago. That’s when Robert Tonyan burst onto the scene. After going undrafted and having a pair of non-descript seasons with the Packers, Tonyan was the talk of Titletown.

During that 2020 season, Tonyan had 52 receptions, including 11 for touchdowns which tied him with Kelce for the most by a tight end.

But Tonyan’s bright future took a major hit last October when he suffered a torn anterior cruciate ligament injury. He missed the remainder of the season before returning this season.

As expected, it’s been a trying season so far for Tonyan. He has yet to flash the form and productivity of the 2020 season.  He has 40 catches, which ranks 46th in the league, and just one TD catch. The latter came in the Packers’ fourth game of the season against New England on Oct. 2.

Tonyan’s finest hour this season came against the New York Jets six games ago when he had a season-high 10 catches for a season-high 90 yards.

Since then, he hasn’t come close to duplicating that performance. In fact, in the last five games, Tonyan caught only 19 passes – or a paltry 3.8 passes a game.

Not having Tonyan play at a high level has hurt the Packers offense, which has consistently underachieved from Week 1. Making matters worse, nobody picked up the slack for Tonyan.

Backup tight ends Marcedes Lewis and Josiah Deguara have been of little use in the passing game. Deguara has 11 catches and Lewis has just three. Lewis has one TD reception; Deguara doesn’t have any.

With six games remaining on the Packer’ schedule, starting with today’s encounter against the 9-1 Philadelphia Eagles, you know the Packers brass, primarily GM Brian Gutekunst and head coach Matt LaFleur, will be closely monitoring Tonyan’s progress, or lack thereof.

If Tonyan, who’ll be 29 next season, doesn’t show strong indications of being his former self, you can go to the bank the Packers will be looking for his successor this offseason

Previous: Zielinski: Packers won’t be soaring with the Eagles
Next: Even the bumbling Bears’ offense has been better than the Packers’