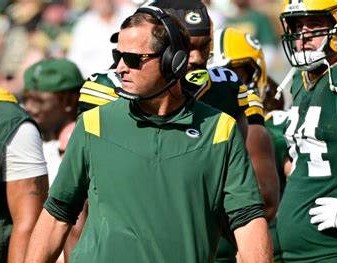 Listen to state-wide radio talk shows or peruse any social media platform and you’ll find plenty of Barry haters. The Packers defensive coordinator is getting bashed for the Packers’ unexpected rough 3-3 start.

Barry’s critics insist the Packers’ defense is one of the principal reasons for the Packers’ woes. And, to a degree, they’re correct. The Packers’ run defense has been abysmal.

Going into today’s Packers’ game against the Washington Commanders, the Packers rank a miserable 27th among the league’s 32 teams against the run. They have allotted opponents an average of 135.2 yards per game.

For that, Barry deserves criticism.

But anyone who closely follows the NFL, realizes perfect defenses are rare. You can be horrible in one aspect of the defense – like the Packers are against the run – but still be quite good in other areas.

Take the current state of the NFL. Right now there is only one team – yes, one team – that has the total package on defense. And that’s the Buffalo Bill, arguably the best team in the league.

The Bills rank second overall in total defense, allowing 281.5 yards per game. The Bills also rank first against the run at 76.2 yards and 11th against the pass, allowing 205.3 yards.

But the NFL’s two other elite teams – Kansas City and Philadelphia – have their distinct flaws on defense, too. Kansas City’s defense ranks 19th overall and 27th in pass defense. Philadelphia ranks fourth in overall defense and sixth against the pass, but are mediocre against the run, ranking 15th at 109.8 yards a game.

The Packers rank fifth in overall defense, surrendering a meager 299 yards a game. The only NFC teams with a better overall defense than the Packers are San Francisco (first at 255.8 yards per game) and Philadelphia (297).

And where do the Packers rank in pass defense?

The Packers have given up a paltry 164 yards via the pass. That folks is did damn good – especially in today’s pass-happy NFL.

If the Packers can rectify their run defense issues – which I contend they will – and remain at or near the top in pass defense, the Joe Barry critics will have to find someone else to criticize.