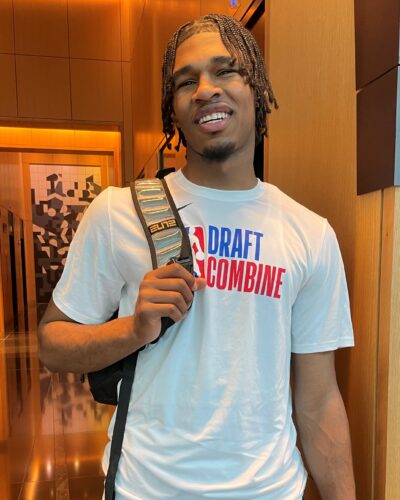 CHICAGO – Justin Lewis isn’t about to make a rash decision about his basketball future.

Lewis, the Marquette University standout, is contemplating whether to return to college or pursue a career in the NBA. The 6-foot-7 forward is currently testing the NBA waters at this week’s NBA Combine in the Windy City.

Asked at the Combine on Thursday when he’ll make a determination of whether to stay or go, Lewis said, “June 1.’’

That is the NBA’s deadline for players to withdraw from the draft and maintain their college eligibility. Unlike the vast majority of players who are currently in the draft and have almost a concrete idea of where they’ll be drafted in the first or second round, there is considerable uncertainty of Lewis’ draft position.

The latter folks contend Lewis would be better served if he honed his skills one more season at Marquette.

As such, Lewis isn’t going to make a hasty decision after the combine wraps up this weekend. He still wants to work out for several teams, including the Milwaukee Buck who have the 24th overall election.

“It’s going well,’’ Lewis said of the draft process, “but I want to explore all my options.’’

“He could be a first round guy, he could be a second-round guy. I don’t know,’’ the scout said. “He’s a nice player; he can score a little bit. But I have questions about his position and his athleticism.

“Where does he play? He’s kind of a tweener, a guy who is in between a 3 (small forward) and a four (power forward). He’s not a bad athlete, but he’s not a super athlete, either.’’

Lewis is coming off a terrific season, one in which he averaged 16.8 points and nearly 10 rebounds while earning All-Big East Conference first-team honors.

Getting a head start

While the Bucks scouting department is doing its due diligence at the Combine, monitoring workouts and conducting interviews, they had already worked out a bunch of draft prospects in Milwaukee.

In fact, the same day the Bucks played a home playoff game, they checked out several prospects. Sources said some of the more interesting ones were swingman Peyton Watson of UCLA, guard Andrew Nembhard of Gonzaga and center Moussa Diabate of Michigan.

Watson is an intriguing prospect. He was a consensus top 10 player at Long Beach Poly High School. But the versatile 6-8 wing with a 7-foot wingspan averaged a measly 3.3 points and 12.7 minutes a game in his one season with the Bruins.

“He’s a mystery man,’’ an NBA personnel director said. “We know he’s talented kid, but he played sparingly at UCLA. So he doesn’t have a body of work to evaluate him.’’

Some scouts project Watson being selected anywhere from 20 to 35.

Nembhard is a lanky 6-4 point guard who did a terrific job of protecting the basketball. He finished seventh in the nation with a 2.97 assist-to-turnover ratio last season. In his two seasons at Gonzaga, Nembhard helped the Bulldogs post a 59-5 record.

Diabate, a 6-11 center who was born in France, is a work in progress. He didn’t start playing basketball until he was 12 years old. In his one season with the Wolverines, Diabate played 32 games and started 16 of them. He averaged nine points and six rebounds. He flashed his potential with a 28-point showing against Iowa. In that game, he went 12 for 16 from the field.

“He’s all potential,’’ a longtime NBA scout said. “He has size and he has athleticism. But he’s not ready; he should go back to school.’’

Some NBA officials claim Bucks assistant coach Darvin Ham is the frontrunner for the vacant Charlotte head coach position. Ham has interviewed twice with the Hornets. … Bucks forward Bobby Portis showed up at the combine on Wednesday. … Also in attendance this week is 94-year-old Bill Bertka. He has been in the NBA since 1971 when he was hired as an assistant coach by the Lakers. … The Bucks, like all teams at the combine, have interviewed several prospects, one being G League Elite guard Dyson Daniels. The Aussie is regarded as a mid-first round candidate. … Iowa’s Kris Murray intends to work out for some team before deciding whether to stay in the draft. Keegan Murray, Kris’ twin brother, is a projected top six pick. … Jrue Holiday was the only Bucks player with playoff bonuses in his contract. If the Bucks had advanced to the Finals, Holiday would have collected $240,000. He would have also collected $1 million if the Bucks had won the title. … An NBA personnel director on Milwaukee forward Patrick Baldwin’s showing thus far at the combine: “He looked pretty good. He’s a fundamentally-sound player. Like I said, I think he’s doing very well.’’

Previous: Bucks’ blowout loss in Game 7 was one of the worst in NBA history
Next: This could be a special season for Yankees