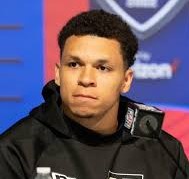 Yet, the expectations for the Packers’ rookie receiver are already sky high.

With the Packers having a Grand Canyon size hole at receiver with the departure of Davante Adams and Marquez Valdes-Scantling, the perception is Watson will plug a big part of it. The perception is largely based on history, that Packers second-round selections like Watson can thrive. Greg Jennings, Jordy Nelson, Randall Cobb and Adams all proved that.

Yet, while all of the aforementioned receivers made their mark in Titletown, it didn’t occur instantly. In fact, Messrs. Nelson, Jennings, Cobb and Adams all had run-of-the-mill rookie seasons and took a while before making a significant impact.

Here is a statistical breakdown of how Jennings, Nelson, Cobb and Adams fared in their initial seasons with the Packers:

Even with the addition of Watson, who figures to be a starter from Day One, the Packers still need to add a quality veteran receiver to their roster to become a viable Super Bowl contender.

James Jones, who was a third-round pick by the Packers in the 2007 draft, now works for the NFL Network.

In a recent segment, Jones was asked his opinion of the best receiver in the draft. He heaped praise on Watson and ranked him as the second-best rookie receiver – even though six other receivers were drafted ahead of him: Drake London at 8 by Atlanta, Garrett Wilson at 10 by the New York Jets, Chris Olave at 11 by New Orleans, Jameson Williams at 12 by Detroit, Jahan Dotson at 16 by Washington and Treylon Burks at 18 by Tennessee.

It was Skky Moore of Western Michigan, who was chosen by the Kansas Chiefs with the 54 overall selection.

Said Jones of Moore: “They (the Chiefs) are going to be spinning the ball all over the field. Skyy is an extremely good rout runner, can make the tough catches, really good after the catch with the YAC yardage. This young fella is going to have a really good year. I got him as my Offensive Rookie of the Year.’’

Besides Watson, the Packers drafted two other receivers: Romeo Doubs of Nevada in the fourth round and Samori Toure of Nebraska in the seventh round.

Asked to compare each of those three receivers, Jones said Watson reminded him of Jordy Nelson, Doubs of Greg Jennings and Toure of … James Jones