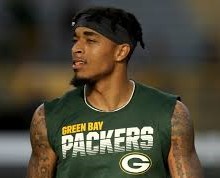 Going into this season, there were two generally accepted assumptions about the Green Bay Packers:

But as the adage goes, never, ever assume.

Now, just past the midway point of the regular season, the opposite has occurred. The Packers’ offense has spun its wheels and has been relatively ineffective, while the defense has been astonishingly good under extraordinary adverse conditions.

The woes of the Packers offense can be attributed to several factors, perhaps the biggest being a makeshift offensive line that has been ravaged by injuries and has yet to have the services of its best lineman in David Bakhtiari.

The offense’s production has also been hampered by Aaron Rodgers, a sure-fire first-ballot hall of famer who hasn’t performed up his ultra-high standards, and a mediocre receiving corps that hasn’t consistently produced.

The bottom line is the Packers’ offense has been rather ordinary this season. They rank a lowly 22nd in yards per game at 334.4 and 20th in points per game at 22.1

That is a stunning drop off from last season.

Despite the offense’s sub-par showing this season, the Packers have a 7-2 record. Much of the credit goes to the defense, which has performed admirably virtually all season under first-year defensive coordinator Joe Barry.

While the Packers were a very respectable ninth in yards per game last season at 334, they have taken it to another level this season and rank fifth at 321.2 yards per game.

And “The Barry Bunch’’ has excelled despite not having their two best players – Pro Bowlers Zaire Alexander and Za’Darius Smith – for the majority of the season because of injuries.

The Packers defense has done its job. Now it’s time the offense does the same.

Previous: Packers should benefit from motivated Rodgers
Next: Packers need Crosby to kick-start his game