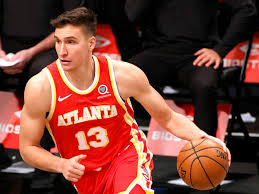 The surging Atlanta Hawks have advanced to the Eastern Conference Finals.

The Milwaukee Bucks deserve some of the credit.

The Hawks have fully capitalized on several poor decisions by the Bucks’ front office in recent years and proceeded to construct one of the best, if not the best, young teams in the NBA.

In fact, three of the Hawks starters – John Collins, Bogdan Bogdanovic and Kevin Huerter – all could be – and should be – on the Bucks’ roster.

The Bucks had a golden opportunity to land Collins during the 2017 draft. They had the 17th overall selection and were in the market for a forward. But Bucks general manager Jon Horst opted to select to DJ Wilson and Collins went two picks later to the Hawks.

It was colossal mistake.

Wilson was a bust in Milwaukee before being traded to Houston earlier this season. Collins, on the other hand, has emerged as one of the premier young forwards in the game.

The Bucks were also in position to land Huerter during the 2018 draft. With Bucks coach Mike Budenholzer wanting Donte DiVincenzo, Horst obliged by using the 17th overall selection on him. Two picks later, the Hawks grabbed Huerter.

Both DiVincenzo and Huerter have had solid pro careers so far, although Huerter is only 22 years old compared to DiVincenzo, who is 24.

DiVincenzo underwent surgery for what Bucks officials said was a torn ligament in his left ankle earlier this month and won’t be available in the playoffs.

Huerter, meanwhile, is arguably the biggest reason the Hawks are in the EC Finals. He turned in an exceptional performance in the Hawks’ Game 7 second-round victory over top-seeded Philadelphia. Huerter played 40 minutes in that decisive game, scoring 27 points and grabbing seven rebounds.

Huerter’s value to the Hawks was vividly illustrated during the regular season by the amount of time he spent on the court. He averaged 30.8 minutes a game – second to only star Trae Young’s 33.7 minutes – and appeared in 69 games – the most by a Hawk.

While drafting Huerter and Collins would have undoubtedly benefitted the Bucks, Bogdanovic would have been even more impactful acquisition.

The lethal shooting guard appeared to be joining the Bucks last November when the team had agreed in principle on a multi-player trade with Sacramento that centered around Bogdanovic and DiVincenzo.

But the NBA nixed the trade because the Bucks violated free agency rules. Additionally, the NBA stripped the Bucks of their 2022 second-round draft.

Shortly after the Bucks’ egregious mistake, Bogdanovic signed a four-year, $72 million contract with the Hawks. It looks like an absolute steal.

Bogdanovic was the Hawks’ third-leading scorer this season at 16.4 points a game and clearly demonstrated he’s one of the league’s elite shooters. He connected on 47 percent of his shots. He was a white-hot 44 percent on 3-pointers.

Like Huerter and like Collins, the 28-year-old Bogdanovic has already made his presence felt and figures to be one of the Hawks’ cornerstones for years to come.

Snell, who started 80 games for the Bucks during the 2016-2017 season before being dealt to Detroit in 2019, is now coming off the bench for the Hawks. But he had 23 starts during the regular season when he shot a scorching 57 percent from beyond the arc.

Riley, once an assistant coach and scout for the Bucks, is a senior advisor to Hawks general manager Travis Schlenk.

Before joining the Hawks, Riley played a major role in the enormous success of the Golden State Warriors as be drafted Stephen Curry and Klay Thompson while being the team’s general manager.

McNeive, who worked as an advance scout and assistant coach for the Bucks during the George Karl regime, is the Hawks director of basketball operations.

It marked the only time in NBA history five players played 50 or more minutes in a single overtime playoff game.

The Elias Sports Bureau also confirmed my suspicion the combined number of minutes played by the 10 starters in that game – 479 — was the most ever in a playoff game that went one overtime. The Bucks starters totaled 234 minutes, and the Nets starters totaled 245 minutes.

In other words, the 10 starters averaged an insane 47.9 minutes.

While McMillan is the team’s “interim’’ head coach, sources made it abundantly clear Hawks management would love to remove the interim title.

However, sources also said the 56-year-old McMillan has some reservations whether he wants to be the permanent head coach and may prefer some other role in the organization. Money won’t factor into McMillan’s decision as he is financially set, sources said.

Previous: Portis, Tucker will likely be ex-Bucks next season
Next: Budenholzer still on the hot seat