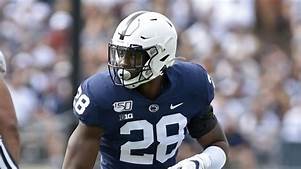 Home » Gery's Blog » Pass rusher should be on Packers’ radar

The Packers registered 41 sacks, tying the Miami Dolphins for 10th place in that category.

Almost one third of those sacks was recorded by outside linebacker Za’Darius Smith, who amassed 12½. That total tied Smith for fourth place in the NFL.

After Smith, though, there was a distinct drop off in sack production for the Packers. The Packers’ second-leading sack man was young outside linebacker Rashan Gary, who finished with five.

Yet another outside linebacker, Preston Smith, ranked third on the Packers’ sack list with four.

While the Packers’ outside linebackers were a formidable pass rushing corps, the same couldn’t be said for the team’s defensive line. Kingsley Keke topped the D-line with four sacks, while Dean Lowry and Kenny Clark managed a mere three and two sacks, respectively. Tyler Lancaster didn’t have any.

Suffice to say, the Packers could use a productive passer along the line. The upcoming draft may provide one — even though the Packers are picking, as of now, at the tail end of the first round with the 29th overall pick.

According to several NFL officials. Four defensive ends are virtually locks to be first-round selections. They are Jaelan Phillips of Miami, Paye of Michigan, Azeez Ojulari of Georgia and Jayson Oweh of Penn State. Some scouts contend Gregory Rousseau of Miami could be a first-round selection as well, although others project him as more of a second-rounder.

Of the aforementioned group, the 6-foot-5, 255-pound Phillips is arguably the most complete edge rusher in the draft and is the most likely to be gone by the time the Packers pick. Paye, some scouts believe, will also be drafted before the Packers’ turn.

Yet, it’s not out of the realm of possibilities Oweh, Paye, Ojulari and Rousseau could all be on the board for the Packers. If that scenario unfolds, who would be the best fit for Green Bay?

If it’s strictly a passer rusher the Packers covet, the NFL officials contacted for this article leaned heavily toward Oweh. At 6-foot-5, 257 pounds, Oweh is a physical freak.

Yet, despite his physical gifts, Oweh somehow didn’t come up with a single sack last season. A veteran AFC scouting director’s opinion on Oweh mirrored those of the other scouts:

The 6-2, 249-pound Ojulari is also an intriguing pass rusher and, like Oweh, possesses excellent speed. He was timed at 4.6 in the 40 at his pro day.

But some scouts expressed concerns about Ojulari’s lack of strength and tendency to take some plays off.

“He’ll flash as an edge rusher but he lacks size and sometimes effort,’’ an AFC scout said of Ojulari, who had 8½ last season as a junior for the Bulldogs.

“He’s pretty damn good. He’s more of a rugged run defender and not a great rusher,’’ an AFC scout said of Paye, who had only 11½ sacks in his four seasons with the Wolverines.

Rousseau, who carries 266 pounds on his 6-6 frame, is somewhat of a mystery man. He opted out last season after totaling 15½ sacks the previous season.

Some teams are intrigued, but he has his skeptics. “Yeah, he could go in the first round,’’ an NFC scout said. “But I wouldn’t take him that early. I think he’s overrated.’’

A couple of second-round defensive end prospects are 6-5, 259-pound Joe Tryon of Washington, who was credited with eight sacks two seasons ago before opting out last season, and 6-4, 256-pound Joseph Ossai of Texas, a native of Nigeria who was a disruptive force on the field for the Longhorns

Tryon figures to go early in the second round, and Ossai is projected as a mid-to-late second-round choice.