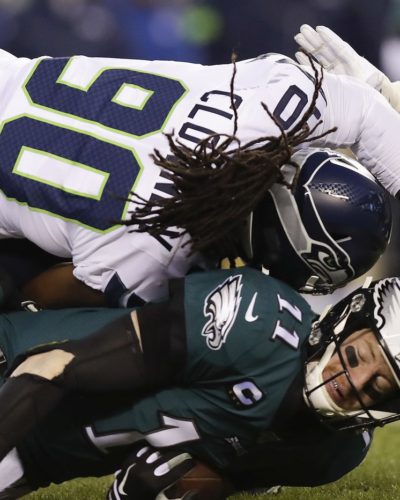 Aaron Rodgers is having a season to remember.

Carson Wentz is having a season to forget.

Rodgers, the Green Bay Packers’ hall of fame in-waiting quarterback, has been nothing short of sensational. He has thrown a league-leading 33 touchdowns while being picked off just four times. He is a legitimate MVP candidate.

As for Wentz, the Philadelphia Eagles’ veteran quarterback, it’s been a season from hell. He thrown for 16 touchdowns but he’s also has been intercepted 15 times.

So, why is one excelling and the other foundering?  Perhaps the primary reason is this: One has a quality offensive line and the other doesn’t.

In Rodgers’ case, he is being protected by one of the best offensive lines in the business, one that has thrived despite being injury-riddled. The Packers’ offensive line boasts arguably the best left tackle in the game in David Bakhtiari and one of the game’s best and versatile performers in Elgton Jenkins. Additionally, some NFL observers regard Packers center Corey Linsley as the league’s best at his position.

It wouldn’t be out of the realm of possibilities to see Bakhtiari, Jenkins and Linsley all being Pro Bowl selections. In contrast, the Eagles, whose line has been decimated by injuries, isn’t going to have one Pro Bowl selection.

One statistic clearly illustrates the state of each team’s offensive line: sacks. In 11 games this season, Rodgers has been sacked just 11 times.  In the same number of games, Wentz (pictured above) has been sacked 46. No, that isn’t a type.

Being sacked 46 times makes Wentz the undisputed leader in that category in the NFL. Seattle’s Russell Wilson ranks a distant second in that category. He’s been sacked 35 times – or 11 fewer times than Wentz.

Wentz has been vilified in the media for his poor play, but could any quarterback, including Rodgers, produce behind such an abysmal offensive line? Of course, not.

Barring a miracle of sorts, it’s going to be another long game today for Wentz and Eagles and another fun-filled and victorious one for Rodgers and the Packers.