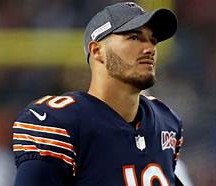 Last week, the Green Bay Packers suffered an overtime loss to a talented Indianapolis Colts team. Tonight, the Packers (7-3) will try to avenge that loss against the Chicago Bears (5-5) at Lambeau Field.

The Bears are riding a four-game losing streak and are desperate for a win against their archrival. Quarterback Mitchell Trubisky will start for Nick Foles after being benched earlier this season in the middle of the Bears’ Week 3 victory over Atlanta.

The Bears boast one of the best defenses in the NFL. But both Bears’ quarterbacks are incapable of leading an offense, which is why the Bears aren’t a legitimate contender in the NFC.

Trubisky has experienced some success this season and has the potential to make plays with his legs. He is 1-5 all-time against the Packers, however.

This game will come down to the Bears’ offense versus the Packers’ defense. The Packers cannot let the Bears’ mediocre offense beat them. It would take many mistakes and just overall poor play to let the Bears’ 31st-ranked offense outscore the Packers.

This game shouldn’t be close, even with the Bears having a quality defense. It is a game the Packers can’t lose if they are serious about being one of the NFC’s top teams.