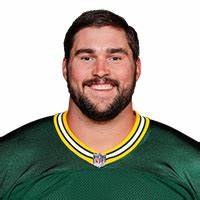 The Packers will be without the gifted Adams for the second straight game when they play the Falcons tonight. But don’t assume the Packers’ aerial attack is going to be grounded. Not by any stretch.

Just like last week against the Saints, when Adams missed that game, the Packers had little trouble mounting a formidable passing game. You can attribute that to two things: Aaron Rodgers’ brilliance and a herculean showing by a banged-up and revamped offensive line.

Rodgers, always the perfectionist, has been, well, perfect when protecting the football this season. He has yet to have a pass picked off through three games. The correlation between ball security and winning certainly applies to the Packers, who are 3-0.

As for the offensive line, it has responded magnificently to adversity, especially on the make-shift right side where Billy Turner has moved from guard to tackle and Lucas Patrick (pictured above) has replaced Turner at guard. With three games in the bank, the offensive line has surrendered a measly two sacks.

Now, contrast that top-of-the-line production to the train wreck of offensive line play in Houston, where Deshaun Watson has been sacked 16 times, or in Cincinnati, where rookie Joe Burrow has been sacked 15 times. And, how about Philly’s Carson Wentz and the Giants Daniel Jones? They’ve been sacked 14 times each.

If Rodgers maintains his focus and the offensive line continues to excel, the Falcons are going to be in a world of hurt. Throw in the fact, the Falcons have yielded 1,051 yards through the air –the eighth worst in the NFL –and they’ll be without starting safeties Keanu Neal and Ricardo Allen because of injuries, the Packers could perhaps fashion their best offensive showing of the season. And that’s saying a lot since they are averaging an insane 40.6 points a game.

Previous: Zielinski: Packers will pass another test with flying colors
Next: Jerry Tapp serves up a plethora of stats from the Packers’ victory over the Falcons