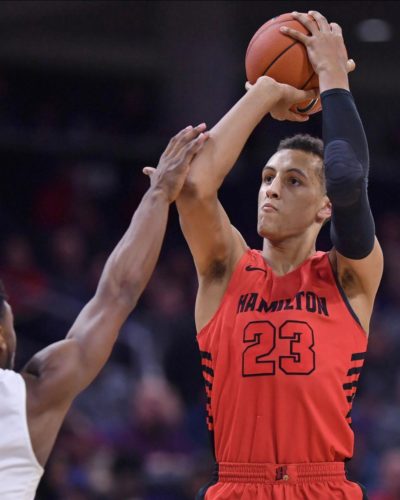 When Patrick Baldwin Jr. recently declared his list of college finalists, the customary blue bloods of basketball were on it.

Among Baldwin’s Top 10 were Kentucky and Virginia and North Carolina and Duke. Considering the 6-foot-9 Baldwin is one of the most coveted seniors-to-be prep players in America, the inclusion of those traditionally rich basketball programs was hardly a surprise.

What was surprising, and some might even say shocking, to observers unfamiliar with Baldwin was his short list included Milwaukee. While the Division I school has fashioned some fine basketball teams over the years and boasted some exceptional coaches, including former Wisconsin coach Bo Ryan and current Auburn coach Bruce Pearl, the Panthers have never, ever been involved with such a high profile recruit like they are now with Baldwin, a consensus five-star recruit who attends Hamilton High School in Sussex.

The reason Milwaukee remains in the hunt for Baldwin is relatively simple: His father is Milwaukee’s head coach. Patrick Baldwin Sr., who enjoyed an outstanding career at Northwestern University and was the Big Ten Conference’s Defensive Player of the Year in 1994, is entering his fourth year as the Panthers’ coach.

The elder Baldwin not only has a stellar reputation for being a strong Xs and Os coach, but he possesses a pleasant, gregarious personality that enables him to relate to other people.

His son can attest to that. The father and son have formed an amazing, virtually inseparable bond.

“Milwaukee was not much of a surprise to me,’’ the younger Baldwin said of placing the Panthers on his college list that also includes Wisconsin, Georgetown, Michigan, UCLA and Northwestern. “I’m sure a lot of people who don’t know me as well were kind of surprised.

“But the people that know me pretty well and know my father, they were not very surprised.  …. I know that stirred up a lot of stuff.’’

While some cynics may scoff at Baldwin listing Milwaukee as a finalist for his basketball services, saying he merely did that as a favor to his father with the intention of bringing Milwaukee more local and national publicity, Baldwin said the Panthers aren’t strictly on his list to maintain family harmony.

“Yeah, I’m serious about them,’’ Baldwin said of Milwaukee. “I think that’s really what’s prolonging my commitment, just kind of that factor. Obviously, my dad is a strong influence in my life. It’s hard to go away from him, knowing that I get a chance to play for him.

“But there’s a ton of other great schools that play at a very high level and play against top talent every night. So I’m kind of in a difficult divide between if I want to go to a high major school or stay home and go to  Milwaukee.’’

Whenever Baldwin winds up, rest assured he’ll make an impact. He is clearly one of the finest prep players ever from Wisconsin and that’s reflected in his national rankings.

ESPN lists Baldwin as the second-best player in his class behind 7-0 Chet Holmgren of Minnehaha (Minn.) Academy. Ditto for 247Sports, which ranks Baldwin only behind 6-8 Jonathan Kuminga from The Congo. Kuminga has reclassified and on Wednesday decided to forego college to play in the NBA’s G League.

Baldwin vividly showed why he’s so highly regarded in leading Hamilton to a 22-3 record last season. With Baldwin leading the charge, the Chargers advanced to the WIAAA Division 1 sectional final before having their season abruptly halted because of COVID-19.

Baldwin, who has an exquisite all-around game, averaged 24.3 points and 10.8 rebounds last season. He was selected the Gatorade Wisconsin Player of the Year.

Not one to rest on his laurels, Baldwin has been working extremely hard this summer to tweak his game.

“I work out pretty much as I can,’’ Baldwin said. “I’ll probably aim for about four or five days out of the seven, getting proper rest, spacing it out, probably two workouts a day, lifting and skill work.

“It’s really working on my skills, developing as a player, without overusing myself throughout the summer, which is kind of a hole I fell into last year when I was kind of tired down the stretch.’’

Whenever Baldwin is working on his game, more often than not his father is alongside him, offering encouragement and insight.

“When I was younger, if I had worked only on finishing and getting to the basket, getting by guys, yeah, I’d dominate when I was 10 or 11 years old. But as you progress, you’d have limited potential on the floor in terms of shooting and floor spacing. And that’s where the game is going.’’

Baldwin’s desire to become a better player isn’t confined to being on the court or weight room. He’s a student of the game. For years now, he’s been studying film, watching player breakdowns.

He frequently will check out film of the NBA’s premier players and attempt to incorporate their strong points into his game.

“I’d say my love for basketball kind of started when I started watching Kevin Durant and Kobe (Bryant),’’ Baldwin said of the current Brooklyn Nets superstar and late Los Angeles Lakers legend, respectively. “I kind of liked Kevin Durant with him being a 6-9, 6-10 do-it-all forward.

“At the time, I was so young. I didn’t realize that I would grow to be the height I am now, which is 6-9. So I was mesmerized by how he could do all those things. As I got older, I realized I had kind of a similar body structure and that I could take a lot of things from his game and insert them into my game.

“And with Kobe, I took notice of his footwork. When his body started to kind of deteriorate, he became more of an efficient one, two dribble scorer, with a really good jab series. So, as I got older, I started liking Kobe a lot more.’’

But the player who has piqued Baldwin’s curiosity the most lately is Jayson Tatum. Just 22 and in his third pro season with the Boston Celtics, the 6-8 Tatum is one of the NBA’s rising stars.

“I’m on the Jayson Tatum bandwagon a little bit because of his run since the All-Star break,’’ Baldwin said. “I think he was averaging like 30 points, nine rebounds and five steals, something ridiculous.

“So, I’ve been watching him and I’m seeing a ton of similarities between him and myself. I’ve been trying to take a lot of stuff from his game.’’

Baldwin isn’t the only one who sees his game mirroring Tatum’s. A longtime Division I college coach who works for one of the top programs in the nation also favorably compared Baldwin with Tatum at comparable ages.

While Baldwin is consumed with basketball, he does finds time to unwind in ways typical of a teenager. He’ll play a video game, listen to music and go on bike rides.

His favorite get-away-from-basketball activity may be art.

“I’m big on sketch,’’ Baldwin said. “I’m trying to get more into paint, canvas, oil, pastels, a lot of portraits, a lot of landscaping. It helps me get my mind off basketball for a second.’’ 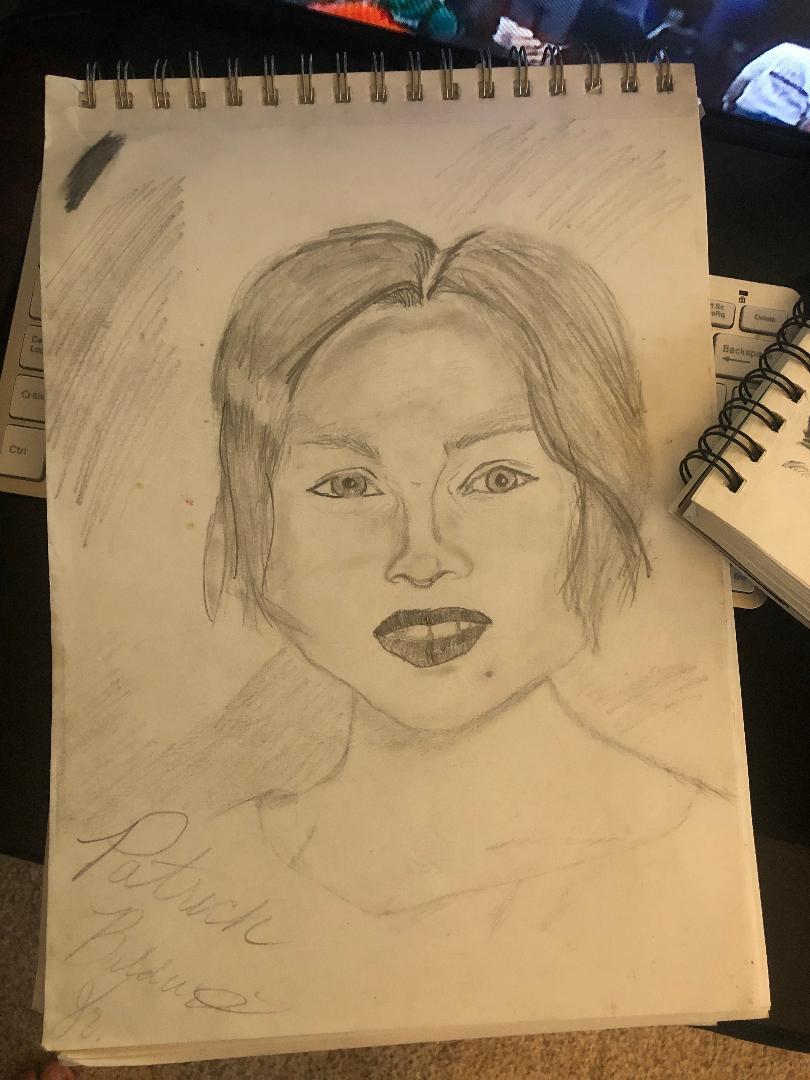 Baldwin, an accomplished student with a 3.7 grade point average, had envisioned selecting a college before his senior year. But because of the pandemic, those plans may have changed. Ideally, he would like to make official visits to five colleges, the maximum number under NCAA rules.

“I’ll probably cut it (his list) when I can figure out when I can get visits,’’ Baldwin said.

Before he moves on to college, though, Baldwin has some unfinished business. He has set his sights on getting Hamilton to Madison for the state tournament and bringing home a gold ball, symbolic of the state champion.

“I think you have to have supreme confidence and any time I’m on the floor I think we have a winning chance in every game,’’ Baldwin said. “As much as I love my teammates, and they were great for us last year, I just have that supreme confidence in myself and my teammates that we can win a state championship next year.’’

It’s that type of demeanor that has endeared Baldwin to Hamilton coach Andy Cerroni. The latter candidly acknowledges how grateful he is to mentor Baldwin and raves about the 17-year-old’s talents, humility and character.

Said Cerroni, who has 31 years of head coaching experience on his resume, including the last 18 at Hamilton: “He is such a skilled player for his age. He’s really good, really good. And I think he’s an even better kid. He’s got the whole package. I feel blessed to have the opportunity to coach him.’’

— Photo and sketch courtesy of the Baldwin family

Previous: Have you ever heard of Dave Eggler, and do you know what MLB record he holds?
Next: Brewers are just 1 of 11 teams to have never made the playoffs 3 straight years