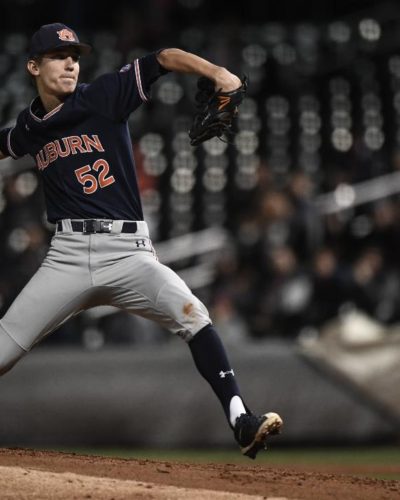 Ryan Hoerter announced his decision to transfer to the Milwaukee Panthers on Thursday. The right-handed pitcher spent the last three years at Auburn University after being the top-ranked recruit in the state of Wisconsin in 2017.

Hoerter battled injuries in his last two years at Auburn. He medically redshirted due to an ulnar nerve issue in his right elbow, which didn’t require surgery, in 2019 and then didn’t pitch in the abbreviated season this spring due to a collapsed lung.

The injury this season caused Hoerter to reevaluate his situation and explore new opportunities before the start of the season. He is appreciative of his time at Auburn but felt it was in his best interest to transfer to a new program, he said.

“It was another bump in the road and steered me towards getting a fresh start somewhere else,” Hoerter said. “With this coronavirus stuff and with the size rosters are going to be, I thought it would just be best for myself and my future dreams to move on to Milwaukee.”

Once Hoerter decided to transfer from Auburn, he preferred to continue his collegiate career at a program in the Midwest. Although Arizona State expressed interest through a mutual friend and San Diego called him, Hoerter deliberated over the Panthers, Northwestern and Division II University of Illinois Springfield, he said.

Hoerter was a business analytics major at Auburn but plans to switch to marketing at Milwaukee so he can stay on track for graduation. The quality business program at Milwaukee, his familiarity with some of the student-athletes on the baseball roster and the program’s new facility factored into his decision.

The Panthers were supposed to play in their new ballpark this spring until their season was canceled due to the coronavirus pandemic. Milkmen Stadium, a sparkling new 4,000-seat stadium in Franklin, opened last year and is the home of the Milwaukee Milkmen, an American Association of Independent Professional Baseball team, and the Panthers.

When Hoerter took an official visit to the Panthers in high school, the newly constructed ballpark was in its early stages. The Panthers played at Henry Aaron Field, a glorified high school diamond on the north side of Milwaukee, until last year.

“I think that was huge for me,” said Hoerter on the new ballpark. “I saw the new field going up and thought that was a Power Five field right there. You don’t see that very much in the Horizon League or wherever you go. That was such a big thing as well to see the direction of the program. It was awesome.”

Hoerter was eager to play for Auburn out of high school. His comfort with the coaching staff and players and the opportunity to pitch for an elite program in the Southeastern Conference, which is the best conference in college baseball, intrigued him.

He pitched briefly as a freshman in 2018. He started two games and made seven total appearances, recording a 6.23 ERA with five strikeouts and seven walks allowed in 8 2/3 innings.

In his freshman year, he pitched alongside right-hander Casey Mize, who was the first overall pick by the Detroit Tigers in the 2018 MLB draft. He also was a part of the same recruiting class as righty Tanner Burns, who was Auburn’s ace the last two years and is a potential first-round pick in this year’s draft.

This spring, Hoerter also worked with Auburn pitching coach Tim Hudson, who pitched in the major leagues for 17 years.

Being surrounded by talented pitchers and coaches helped Hoerter’s development on the mound, he said.

“Coach Hudson was one of my favorite coaches I’ve had up until this point,” Hoerter said. “He was hired over winter break, and early in the spring, he changed me in three weeks. It was pretty incredible the amount of progress I made in such a short time. It was pretty cool to have him there. It was a dream come true.”

Hoerter is a 6-foot-6, 197-pound right-handed pitcher who throws a four-seam fastball, changeup, slider and splitter.

He mostly throws a four-seamer but occasionally mixes in a two-seamer. The pitch reached 94 mph before his injuries but has recently sat in the low-90s. His changeup is his best off-speed pitch, and when it’s working effectively, he can locate the pitch in any quadrant of the strike zone and has the confidence to throw it in any count.

With NCAA granting all spring student-athletes an extra year of eligibility since this spring was cut short, Hoerter will have two years of eligibility remaining. He also can play immediately for the Panthers next year since he didn’t pitch this spring.

Hoerter is eligible for this year’s MLB draft but likely won’t be selected due to his inability to stay healthy for the last two years. He will be eligible once again in 2021 and 2022.

Out of high school, the Pittsburgh Pirates drafted Hoerter in the 36th round after he posted a 0.32 ERA with 97 strikeouts in 59 innings his senior year in 2017.

Hoerter is looking to play in a college league this summer. He said he has “a couple different options” and hopes to play in the Northwoods League if it occurs this summer depending on the coronavirus.

Regardless of what happens this summer, Hoerter is thrilled for the next step in his collegiate baseball career with the Panthers.

“I just want to give myself the best chance to not only get drafted but to enjoy the game that I love,” Hoerter said. “I think being close to home, having my family and friends be able to come out and see me, and really just be a big part of a team again and having that winning feel are all things I am looking forward to.”

Previous: NFL draft provides the perfect storm for Packers’ Gutekunst to wheel and deal — again
Next: The quest for being a .300 career hitter is daunting