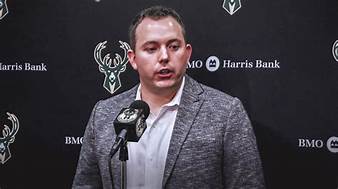 Rewind the clock to this time last year and it was common knowledge among NBA officials that the Milwaukee Bucks were coveting a shooting big man.

And right before the trading deadline, the Bucks got their man. Or so they thought.

The Bucks acquired power forward Nikola Mirotic, a proficient long-range shooter, from the New Orleans Pelicans. The price was steep. Even though Mirotic was in the final season of his contract, Bucks general manager Jon Horst sent four – repeat, f our – second-round picks—to the Pelicans, including a pair in this summer’s draft – while sending part-time starting forward Thon Maker to the Detroit Pistons in the three-team transaction.

And what kind of return did the Bucks receive by Horst surrendering all of those picks, along with Maker? They got a rent-a-player. Mirotic apparently had no desire to remain with the Bucks, or remain in the NBA, and bolted over the summer to play in Spain.

Mirotic, slowed by a thumb injury, played in a mere 14 regular-season games for the Bucks. He then appeared in 14 playoff games but shot a paltry 29 percent from beyond the arc in postseason.

Bucks coach Mike Budenholzer used Mirotic just nine minutes in Game 5 of the Eastern Conference Finals against Toronto and then didn’t play him a single minute in the decisive Game 6.

It was just a horrendous trade, one of the worst in Bucks’ history.

Now, fast forward to today. With the NBA trade deadline fast approaching – It is Thursday at 2 p.m. Central time – sources said the Bucks could once again use future draft picks as a way to potentially improve their team.

According to multiple league sources, the Bucks are receptive to trading their top pick in the June draft. The Bucks obtained the pick from Indiana as compensation for Brogdon. If the draft was held today, the Bucks’ pick would be the 21st overall.

“What’s crazy is they’re now willing to go into the luxury tax,’’ a league source said of the Bucks. “If they’re willing to pay the tax now, why didn’t they do that to keep Brogdon?

“If they think they’re going to get a player better than Brogdon by using that (No. 1) pick and whatever else. …. Good luck with that.’’

Several NBA officials claim the Bucks, who are currently $3.3 million under the luxury tax, have inquired about several players, among them Robert Covington of the Minnesota Timberwolves and Alec Burks of the Golden State Warriors. Both of the aforementioned players are excellent perimeter shooters who are drawing keen interest from numerous playoff-caliber teams.

A source close to the Bucks said the team had reached out to Golden State about the availability of Glenn Robinson III, the son of former Bucks standout Glenn “Big Dog’’ Robinson.

Robinson, like Covington and Burks, is a dangerous perimeter shooter. He has connected on 40 percent of his 3s this season while averaging 12.9 points.

There are a spate of other talented shooting guards/wings on the trading block as well, including Detroit’s Luke Kennard, Orlando’s Terrence Ross, Minnesota’s Andrew Wiggins and New Orleans’ JJ Redick.

Redick is an intriguing trade candidate. Despite being 35 years, he has played well this season. He’s started 35 games, is averaging 15.6 points a game and, last but definitely not least, shooting a scorching 46.4 percent from 3-point range. That is the best percentage by a player who has taken an average of more than three 3-pointers a game. He is a career 41.6 percent 3-point shooter.

The Pelicans are pushing for a playoff spot in the Western Conference and may be reluctant to move Redick, who is being targeted by a host of playoff hopeful teams.

But Redick’s stock will never be higher and the Pelicans have a glut of shooting guards, including veterans Jrue Holiday and E’Twaun Moore and two other promising players in Nickeil Alexander-Walker and Josh Hart.

Redick, who had a cup of coffee with the Bucks during the 2012-2013 season, would be a significant upgrade for the Bucks at the two spot where Wesley Matthews is clearly on the downside of his career, while Donte DiVincenzo and Sterling Brown are still in the developmental stages of their careers.

“If the Bucks got Redick …. wow,’’ an Eastern Conference GM said. “He’d be perfect for them. I think that’s all they need to get there (the Finals).’’

So, what would it take for the Bucks to obtain Redick?

“Maybe (Ersan) Ilyasova, Brown or DiVincenzo and that first-round pick,’’ the same EC GM said. “Some kind of package like that. That might get it done.’’

While Ilyasova’s name has surfaced in trade rumors concerning the Bucks – presumably to be part of a trade package and/or to get off the $7 million he’s owed for next season – Brown, Dragan Bender, D.J. Wilson and DiVincenzo –have been prominently mentioned in trade scuttlebutt. None, except DiVincenzo, has any real market value.

It’s also known the Bucks would listen for offers for starting point guard Eric Bledsoe, although few teams would want to take on his contract that will pay him $16.8M next season and then $18.1M and $19.3M in the subsequent years.

“I’ve heard there’s a split with those guys (in the Bucks organization). Some think they can get it done with that guard group they have and don’t want to make any moves,’’ a league executive said. “But some people there don’t think their guards are good enough to get it done in the playoffs, that they need to get better and need to make a move.’’

Some other trade deadline talk:

Previous: A Bucks’ victory over Pelicans may have special significance
Next: Yelich feasted on Cardinals’ pitching last season