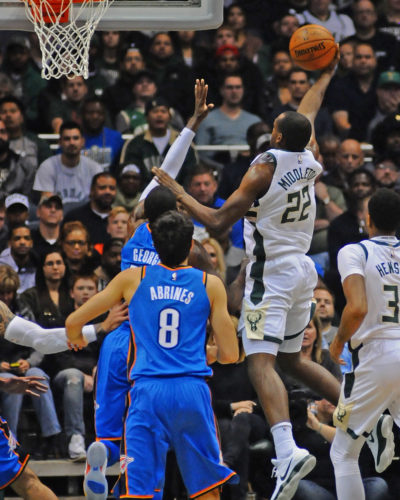 Home » Gery's Blog » Are the Bucks a one-man band … as Charles Barkley seems to believe?

There is a perception the Milwaukee Bucks are a one-man show, and that show is Giannis Antetokounmpo.

Conspicuous by his absence on Sir Charles’ list was Khris Middleton, who is unquestionably the second-best player on a Bucks team that has the best record in the NBA.

At the time of Barkley’s sections, Middleton was averaging 19.4 points per game – despite averaging only 28.6 minutes – while shooting 49.8 from the field and 41.9 percent from 3-point range.

But while Barkley’s three colleagues on “Inside the NBA’’ –Ernie Johnson, Kenny Smith and Shaquille O’Neal – all chose Middleton as an All-Star reserve, Barkley felt Middleton’s play wasn’t at the same level of last season when he was chosen by the coaches for his first All-Star Game appearance.

“I normally would have taken Khris Middleton but he’s missed a lot of time, in my opinion,’’ Barkley said of Middleton, who has missed seven games this season. “So I didn’t reward him.’’

Barkley later added, “I don’t think he’s been as good as he was the last couple of years.’’

Middleton, whether intentionally or not, responded in style to Barkley’s snub on Tuesday night with a career-high 51 point performance against Washington.

While Barkley shunned Middleton and didn’t believe the Bucks, despite their exceptional record, deserved to have two All-Stars, he chose two players – Andre Drummond and Derrick Rose — from the Detroit Pistons, who have a 17-31 record.

Barkley also chose two Miami Heat players – Jimmy Butler and Bam Adebayo – even though the Heat are in third place in the Eastern Conference standings, 8.5 games behind the Bucks.

While Barkley’s omission of Middleton was surprising, so was somewhat Smith’s selection of Malcolm Brogdon, whom the Indiana Pacer acquired in a trade with the Bucks last summer.

Brogdon has played like an All-Star and is perhaps the major reason the Pacers are playoff bound. He is averaging 17.1 points and 7.3 assists while shooting 44 percent field and 93 percent from the line.

But Brogdon has also missed 14 of the Pacers’ 47 games.

Barkley, Johnson and O’Neal didn’t have Brogdon on their reserves lists.

The All-Star reserves will be announced Thursday night.

While I expect James to tab his teammate Anthony Davis with the first selection, I think it would be shrewd for Antetokonmpo to select Luka Doncic, the Mavericks’ phenomenal playmaker.

Can you imagine the show Antetokoumpo would put on as the recipient of Doncic’s passing wizardry?

Previous: 24 stats about No 24, Kobe Bryant
Next: Scoring first is important in the Super Bowl