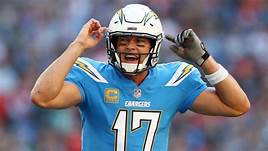 The Green Bay Packers have rattled off four consecutive victories to sit with a 7-1 record halfway through the season. They’ve overachieved under first-year coach Matt LaFleur and are one of the NFC’s top teams based on winning percentage.

At 3:25 p.m. Sunday, the Packers face the underperforming Los Angeles Chargers (3-5). Coming into the season, many thought the Chargers would compete for one of the top spots in the AFC. They have talent on both sides of the ball, but injurie and inconsistent play have put the Chargers in danger of missing the playoffs.

The Chargers’ defense ranks 10th in the NFL with 19.6 points allowed per game. The Packers are right behind them, surrendering 20.4 points per contest. Although both teams boast solid defenses, this game will come down to each team’s playmaking ability on offense.

The Packers’ offense has shown explosiveness and balance through the first eight games. It hasn’t always been pretty, but quarterback Aaron Rodgers has maintained his status as one of the game’s best, while running back Aaron Jones has turned into a weapon in the running and passing games.

Quarterback Philip Rivers can still make plays with the Chargers ranking sixth in the league in passing at 281.1 yards per game. Keenan Allen is his favorite target, while the Chargers also possess an underachieving but intriguing running attack with Melvin Gordon and Austin Ekeler.

I could see this game going either way. It’s never easy traveling across country and the Packers are due for a slipup at some point. The Chargers desperately need a win and don’t be surprised to see them prevail.

Previous: Nationals beat the Astros … and the odds
Next: Packers will charge past Chargers