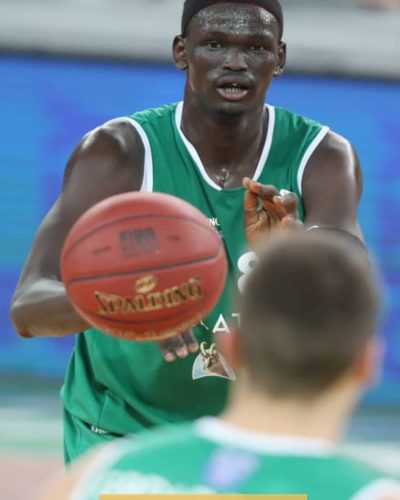 When you compare Thon Maker to his younger brother Matur, they have uncanny similarities.

“They really are a lot alike,’’ said a longtime NBA player personnel director. “Matur is long and so is Thon. Matur has a good skill-set, just like Thon, and they both have good athleticism for big guys.

Indeed, the Maker brothers have much in common, although the 7-foot-1 Thon is about two inches taller than Matur and has a slightly longer wing than Matur’s 7-3.

Thon was also a better shooter entering the draft. In fact, he put on a shooting clinic just prior to the draft that enabled him to soar up the draft charts.

The Milwaukee Bucks wound up taking Thon with the 10th overall selection in the 2016 draft. He played 2½ seasons for them before being dealt to Detroit in February.

While Thon was a lock to be a first-round selection, that is far from the case with Matur. The latter isn’t showing up on anyone’s mock draft even though he has drawn interest from a spate of teams, including the Bucks.

Matur, who had a standing reach of 9 feet, 2 inches, came to Milwaukee two weeks and turned in a more than creditable showing. The Bucks currently don’t have a second-round pick, but there has been speculation they’re trying to acquire one.

Besides Milwaukee, Maker has had workouts with the Los Angeles Lakers, Chicago, Washington, Atlanta, Portland, Charlotte and Minnesota.

The sentiment among several NBA officials is that Matur has clearly elevated his game from a year ago when he tested the draft waters. Since then, he’s played professionally overseas, first with Union Neuchatel of the Swiss Basketball League and then Ziatorog Lasko of the Slovenian Basketball League.

“I think he gets drafted,’’ the personnel director said of the 21-year-old Maker. “He is, without question, a better player than last year. I like his progress; I like his potential.

“I could see him being taken in the middle of the second round. I definitely think he’s going to go in that draft range. He’d be a good pick at that point.’’

Everyone knows Fletcher Magee can shoot.

After all, the former Wofford star holds the NCAA record for most made 3-pointers in a career with 509.

On Saturday, Wofford showed off his shooting skills during a workout with the Bucks. That’s when the 6-4 Magee connected on 70 of 100 attempts from beyond the arc.

Amazingly, Magee has had several workouts where he’s made even more than 70 treys, including 75 in a workout with Chicago.

While Magee probably won’t be drafted, it should be noted another top-notch perimeter shooter went undrafted three years ago. That was Fred VanVleet, whose deadly perimeter shooting helped Toronto win the NBA title last week.

An international player whom the Bucks recently worked out was Marcos Louzada Silva, a 6-5 shooting guard from Brazil. …Another recent auditioner for the Bucks was Myie Oni, a 6-6 wing from Yale. Oni hasn’t received much pub, but made an impression on pro scouts when he participated in the Nike Skills Academy two summers ago and more than held his own against highly touted players like Jaren Jackson and Grayson Allen. … The Bucks resume workouts on Monday with team officials expected to check out Jalen Lecque, a raw but gifted guard who played last season for Brewster (N.H.) Academy. Lecque is projected as a late-first, early-second round candidate

Previous: History shows Raptors are in the driver’s seat in Finals
Next: Davis is just what the doctor ordered for ailing Lakers