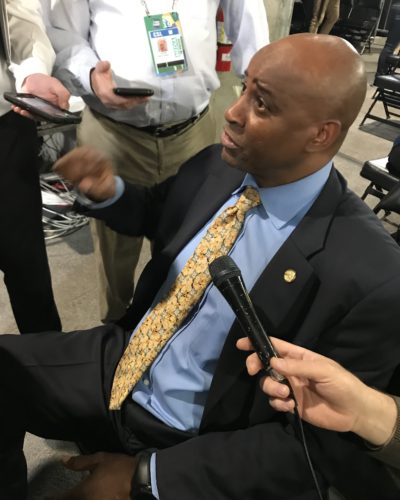 Moncrief and Sikma played three seasons together for the Milwaukee Bucks from 1986 to 1989 and played major roles in the Bucks’ considerable success during that era.

On Saturday, Moncrief and Sikma became teammates again – this time as members of the elite Hall of Fame. The duo was selected to the Naismith Memorial Basketball Hall of Fame and will be formally inducted into the Hall during ceremonies on Sept. 6 in Springfield, Mass.

Moncrief said he was somewhat caught off guard when he received a call informing him of his selection to the Hall.

“We were working at the house and a number comes up on the TV screen. I’m like, ‘Well, I‘m expecting a call, but they have my mobile number.’ So we answered the call and sure enough it was the Hall of Fame. I had gotten the same call two years ago and I was told, ‘Sorry, you didn’t make it.’ It was very nice to hear congratulations.

“I’m pretty even keel. I don’t know what emotions I was expected to feel, other than just very, very appreciative. The game of basketball, the old cliche, it’s been so good to me. I tried to respect the game, I tried to respect the players that played before me because I watched them and had a lot of respect for how they played the game.

“To be part of this group is special, but it also ran through my mind of how many great players that have played the game of basketball, the years that I competed against (them), that would never be in this position.

“So you’re sort of excited but you’re humbled. Because there’s some guys that could at any given time eat my lunch on any given night, and they’ll probably never have this opportunity that I have now to be a Hall of Fame basketball person.’’

Moncrief, 61, played 10 seasons with the Bucks after being the fifth overall selection in the 1979 NBA draft. The 6-foot-3 Moncrief was regarded as one of the best two-way players in the game.

Moncrief, a five-time All-Star, recorded four straight seasons in which he averaged more than 20 points a game and averaged 15.6 points a game over his pro career.

Sikma, 63, was the eighth overall pick in the 1977 draft after playing at Illinois Wesleyan. He played nine seasons with the SuperSonics before being dealt in June of 1986 to the Bucks in a blockbuster trade that involved the Bucks sending Alton Lister and two No. 1 draft picks – who turned out to be Mark Jackson and Jeff Sanders – to the SuperSonics.

The 6-foot-11 Sikma played five seasons with the Bucks and helped them advance to postseason competition each year. He has the distinction of being the only center in NBA history to lead the league in free throw shooting during a season at .922 while with the Bucks in the 1987-88 season.

Sikma averaged 15.6 points and 7.9 rebounds during his pro career.

“I had a tremendous nine years in Seattle,’’ Sikma said. “I was a seven-time all-Star there. As far as my career, you’re probably looking at my most productive years. I’m very proud to be a part of the Sonic franchise …

“But I don’t want to overlook my five years in Milwaukee, either. Those were fabulous. The fact that Sidney and I are going in together – we were there together three or four years – and with coach Del Harris is getting an award (for his contributions to the game) – makes this even more special.’’

The 81-year-old Harris is being recognized with the John W. Bunn Lifetime Achievement award for his 50 years in basketball. He joined the Bucks in 1986 as an assistant coach to Don Nelson before becoming the head coach and general manager until 1992.

He was chosen the NBA Coach of the Year for the 1994-95 season while with the Los Angeles Lakers.

“Del is pretty innovative,’’ Sikma said. “I remember preparing for some playoff series in Atlanta, where we were guarding Dominique (Wilkins) or someone else in the post, and he would stop the practice and move you six inches. He would say, ‘No, I want you here.’ His detail was great.

“And he loves talking about basketball, even still today,