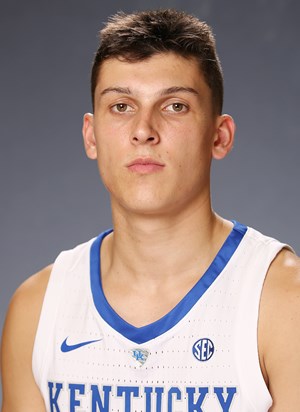 Tyler Herro and Jordan Poole have several things in common.

Both were outstanding high school basketball players in Wisconsin: Herro at Whitnall and Poole at Milwaukee King.

Both signed national letters of intent with high profile programs: Herro with Kentucky and Poole with Michigan.

And they are NBA bound.

At least, all indications point toward Herro and Poole being in the NBA draft in June. Poole has already declared he’s testing the NBA draft waters, while sources said Herro is leaning heavily toward declaring for the draft.

Both players could withdraw from the draft — the deadline to withdraw is May 29 — and return to their respective colleges, although some NBA officials contacted for this story don’t believe that will happen.

So, where are Messrs. Poole and Herro, both shooting guards, projected to be selected in the upcoming drat?

I posed that question to two NBA officials – a college scout and player personnel director – and both had virtually similar answers.

“I saw Herro in a tournament when he was in high school and I thought he was pretty much a one-dimensional player: a shooter,’’ the scout said. “But he got better and better as the season went on at Kentucky. He’s matured a lot.

“He’s still a good shooter from outside but now he’ll take it to the hole more. I see him getting picked in the first round, somewhere in the 20s.’’

The player personnel director said Herro’s ability to shoot the ball is his calling card and helps mask some of his deficiencies.

“If I was advising him, I’d tell him to go back (to college),’’ the player personnel director said. “He’s weak physically and doesn’t defend very well. But he can shoot it pretty well and there’s a place in our game for shooters.

“I personally see him as an early second-round pick but he’ll probably end up in the 20s because of his shooting.’’

Herro, who is 6-foot-5, shot 36 percent from 3-point range this season as a freshman for the Wildcats. He was an exceptional free throw shooter, connecting on 87 of 93 attempts — a white-hot .935.

Herro also started all 37 of Kentucky’s games this season — he was the only Wildcat to do so – and consistently scored in double figures. He scored 29 points against Arkansas.

As for Poole, he is also a threat from the perimeter. He shot 37 percent beyond the arc and 44 percent overall. Poole, who is also listed at 6-5, played a major role in Michigan compiling a 30-7 record this season as he averaged 33.1 minutes in starting every game for the Wolverines.

“If you want my honest opinion on him (Poole), he should stay put and stay at Michigan,’’ the scout said. “I view him as a good shooter, not a great shooter, and he’s just a decent athlete.

“But he’s like the other guy (Herro) in the fact he’s a shooter and there aren’t a lot of good shooters in this draft.’’

Added the player personnel director: “He’s pretty good. He’s a good shooter and I think he’ll get even better in that part of the game. I think he’s solidified his draft position in the 20 range.’’

Off to a great start

Rep1 recently launched a basketball division and landed its first client on Thursday: Jaylen Nowell, the Pac-12 Conference Player of the Year from Washington.

Nowell, a 6-4 shooting guard, possesses a nice all-around game. He averaged 16.2 points and 5.7 rebounds while shooting 50 percent from the field and 44 percent from 3-point range last season as a sophomore.

“Jaylen is an extremely talented basketball player but an even better person,’’ said Ryan Davis, the director of basketball/player agent for Rep1. “We’re extremely excited to have Jaylen as our first basketball client.’’

Flying under the radar

Looking for a “sleeper’’ in this year’s draft?

Then, you might want to keep an eye on Justin Turner, who played in relative anonymity at Bowling Green in the Mid-American Conference.

Turner, a 6-4 combo guard, is quietly piquing the curiosity of some NBA teams and is expected to declare for the draft any day now. Turner, a Detroit native, averaged 18.3 points as a red-shirt sophomore and posted 16, 20-point plus games this season, including two 30-point plus outings.

Previous: TODAY’S SPORTSTAT: Pirates, Reds have been consistent, consistently bad
Next: Griffin’s health is a key factor in Bucks-Pistons series