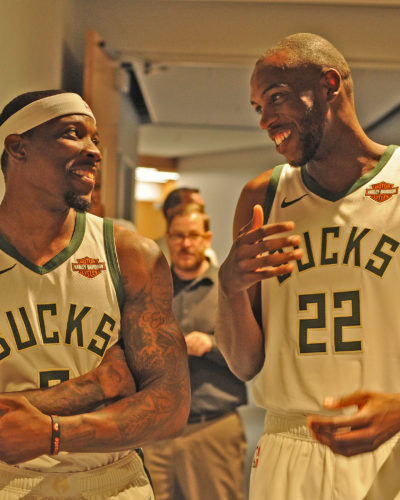 Home » Gery's Blog » If you’re a fan of mediocrity, the Bucks are your team

The Milwaukee Bucks will be playing their home games in a spanking, new venue this season.

The Bucks have been the model of mediocrity for years – they haven’t advanced beyond the first round of the playoffs since 2001 – and that’s especially true the last four seasons after Wes Edens, Marc Lasry and Jamie Dinan bought the franchise from Herb Kohl. To wit:

The other day I reached out to a highly respected, longtime NBA official for his thoughts on the current Bucks, who open their 218-29 season on Wednesday night in Charlotte. I specifically asked him where he projects the Bucks to finish this season.

Sixth in the East.

Despite the hiring of a fine head coach in Mike Budenholzer and a solid offseason addition in Ersan Ilysaova, the aforementioned league official contends the Bucks didn’t improve an iota from last season – and may have even taken a step back.

“Losing (Jabari) Parker was a loss and not getting anything for him was crazy,’’ the official said. “He was their third best player. I know they (Bucks officials) are saying it was all about fit with Parker,  that he didn’t fit in with this team. I don’t buy crap. Parker can fit in with any team. The truth is they wanted to keep him, but I was told he didn’t want them.

“You can’t afford to lose a player with his offensive skills and not replace him and expect to get better. They didn’t get better. And the Eastern Conference has gotten better. It’ll be more competitive than it’s been in a long time.’’

Parker, 23, signed a two-year contract with the Chicago Bulls during free agency in July. He’s fully guaranteed $20 million in this season with the Bulls having the option to re-sign him in the second year for another $20 million.

Mainly because of Parker’s departure and no offseason addition that will move the needle – the NBA official believes the Bucks will once again be a middle-of-the-pack team in the 15-team East.

“Boston is definitely the best; nobody can argue that,’’ the official said. “After Boston, I have, in no particular order, Toronto, Philly and Washington. Indiana took a big, big  step last season and made some nice pickups over the summer. I got them at five, just ahead of Milwaukee, and then Miami and Detroit.’’

While I agree with the official that the Eastern Conference will be more competitive, it still isn’t a very good conference. The Western Conference remains vastly superior in talent. In fact, you can make a compelling case that Boston would be the only Eastern Conference team that could make the playoffs in the West.

As the official noted, Boston is unquestionably the cream of the Eastern Conference crop. Celtics general manager Danny Ainge has done an incredible job of accruing a top-notch talent to go along with a stellar coaching staff.

The Celtics have the best starting five in the East and their depth is impressive. They are so deep they could absorb the loss of a key player, or even two, and still vie for a title –just like last season when they were without their two best players – Gordon Hayward and Kyrie Irving – in the playoffs and still reached the Eastern Conference Finals.

Conversely, can you imagine where the Bucks would wind up if they lost Giannis Antetokounmpo or Khris Middleton to injury? Can you say lottery.

While the aforementioned official projects the Bucks to finish sixth, another Eastern Conference official, with more than two decades of NBA experience on his resume, has the Bucks finishing slightly better.

“To me, it’s Boston, Toronto and Philly,’’ the official said. “Then, I got Indiana and Milwaukee, with Washington, Miami and Detroit getting the remaining playoff spots.

“When I break down Milwaukee’s roster, I see (Eric) Bledsoe as being an OK player, Middleton being a good player and, obviously, Giannis is a very good player.

“But who else do they have? After those three guys, I don’t see anyone who gets me excited. They’ll be a nice team – Budenholzer is a good coach –but their roster talent is nothing special.’’

Time will tell as teams will inevitably tweak their rosters between now and the trading deadline in February. The Bucks are almost a lock to be one of them.

With that in mind, here’s how I see both the Eastern and Western Conference shaking out:

1-. Boston – The Celtics are just strong across the board. They’ll be very good this season and for years to come.

7, Miami – It’ll be Dwyane Wade’s farewell tour, and talented but enigmatic center Hassan Whiteside could make it a fun one if he stays focused.

Previous: Zielinski: Struggling Packers will be just good enough to beat 49ers
Next: PACKERSTATS-Game 6: Receivers have special performances against 49ers