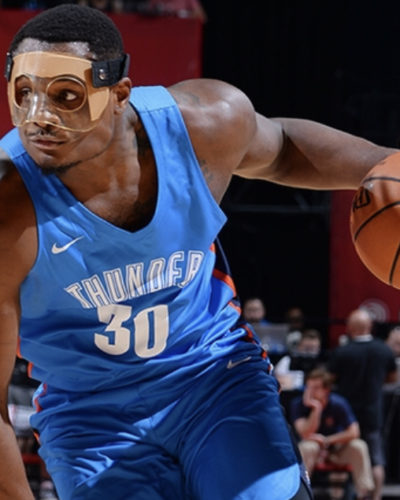 Deonte Burton’s curiosity, unfortunately, got the better of him.

One day, as a five-year old growing up in Milwaukee, Burton couldn’t help but notice a distinct smell emanating from the kitchen of his home. Inquisitive, he wandered into the room and realized the aroma was coming from a deep fryer. He then reached up and tugged on the chord for a deep fryer that was plugged into an electrical outlet. The pot instantly tipped over, sending scorching hot grease over his body.

Hearing Deonte’s horrific screams, his sister, Nicole, rushed to his side and quickly doused him with cold water. But her efforts weren’t nearly enough. Deonte was rushed to a nearby hospital, where the early prognosis wasn’t favorable.

“I had burned about 70 percent of my body, including the whole left side of my body,’’ Burton said, recalling the scariest moment of his life. “The burns were so severe that I had an extended stay at the hospital. I stayed in the hospital for a month and had to get quite a few skin graphs.

“So I know what young children go through when they have to stay in a hospital. It’s hard. But I also remember the doctors, nurses and staff provided wonderful care and treatment. I was fortunate they were able to help me.’’

Now, almost two decades later, Burton wants to help them and the patients who are currently in a situation similar to the one he was at Children’s Hospital of Wisconsin in Milwaukee. The former Milwaukee Vincent High School and Marquette University swingman who is now on a two-way contract with the Oklahoma City Thunder is donating and collecting items for teenagers at the hospital.

Among the items Burton hopes to give the young patients at Children’s Hospital are new and unwrapped presents like video games, toys and novelty items. Individuals interested in assisting Burton can drop off their gifts at Shorty’s Ink, which is located at 4111 W. North Ave. in Milwaukee. The fund-raiser runs through November.

Burton’s project, which also honors his late mother Barbara Ann Burton-Malone, who succumbed to breast cancer four years ago, has gotten off to a fantastic start. Burton said the National Basketball Association, the Thunder and Iowa State, where Burton transferred after playing at Marquette, have already made contributions.

The 24-year-old Burton said he seriously considered establishing a fundraiser for Children’s Hospital about a year ago while playing professional basketball overseas.

“I was in South Korea (playing for Wonju DB Promy) and I had a lot of time to think,’’ said Burton, who scored 16 points in the Thunder’s 119-115 overtime victory over the Milwaukee Bucks on Tuesday night in Oklahoma City. “I came up with ideas of things I wanted to do and this was one of them. My goal is to help people and, as long as I can help one person, I’m happy.

“But I also want to help make Milwaukee better. If all of the players from Milwaukee came together and helped the city of Milwaukee, Milwaukee would be a more beautiful place.

“I’m hoping this (fundraiser) has a snowball effect where people see me helping and that others will decide to join me to make Milwaukee a better place.

“Whatever is given (for the Children’s Hospital fund drive) I will truly appreciate it because they are giving from the kindness of their heart.’’

Previous: PACKERSTATS — Game 5: The gory numbers tell it all
Next: TODAY’S SPORTSTAT–Brewers have performed well at home in postseason games